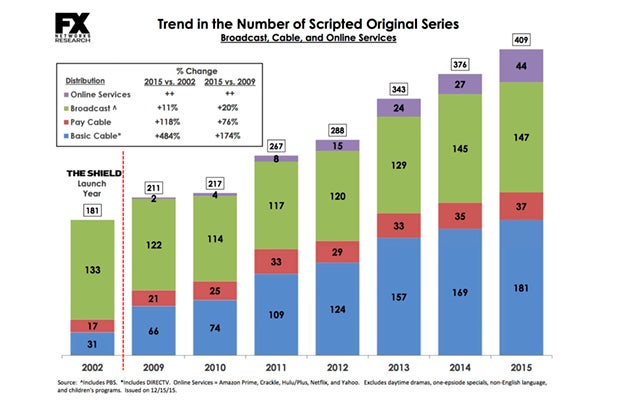 How much TV is too much TV? John Landgraf knows.

The FX Networks and FX Productions CEO declared this summer “that 2015 and 2016 will represent a peak in U.S. TV,” estimating at the Television Critics Association’s summer press tour that this year would see more than 400 original scripted shows on broadcast, cable, and streaming. “This is simply too much television,” Landgraf said at the time

With 2015 winding down, FX on Wednesday delivered a final tally for scripted shows this year: 409.

“The unprecedented increase in the number of scripted series has reached a new milestone in 2015 with a record 409, nearly doubling the total in just the past six years,” Julie Piepenkotter, Executive Vice President of Research for FX Networks. “This was the third consecutive year that scripted series count has grown across each distribution platform – broadcast, basic and pay cable, streaming – led by significant gains in basic cable and digital services. This statistic is staggering and almost unimaginable from where they were a decade ago.”

Landgraf this summer predicted dire consequences for some cable networks upon the deflation of what he characterized as a content “bubble.”

“I don’t think that independent channels are going to fare particularly well in the future,” he said, adding that he anticipates “a culling of the herd” among networks, with larger groups such as HBO, AMC, and, of course, FX, best positioned to survive.