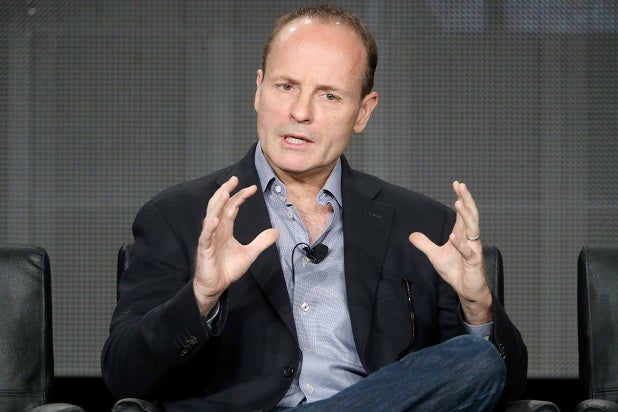 FX Networks and FX Productions CEO John Landgraf predicts that there will be more that 400 original scripted shows on television this year. That, according to Landgraf, is not sustainable.

“This is simply too much television,” Landgraf said Friday at the Television Critics Association summer press tour. “My sense is that 2015 and 2016 will represent a peak in U.S. TV, and afterward we’ll see a decline.”

Landgraf laid out for the press what he described as a “brand effect” in television, in which networks such as FX will evolve into brands that consumers will look to “signposts to their favorite choices,” regardless of platform.

But Landgraf spent the bulk of his session envisioning a tough road ahead for television.

“In the late stages of a bubble you see this kind of desperate scrum, where we’re playing a game of musical chairs and jockeying for position,” he said. The bubble, he predicted, will not “burst” but “deflate” somewhat slowly. “If there are more than 400 shows this year, I don’t think there will be 300 two years from now.”

Muscular network groups such as FX, AMC and HBO, Landgraf predicted, will weather the storm, but smaller networks will have a tougher time.

“I don’t think that independent channels are going to fare particularly well in the future,” he said. He added, “It’s the nature of every industry that you see proliferation, then consolidation,” then described a coming “a culling of the heard” in which some smaller networks will fail.

Asked about the dive that a number of media stocks took this week on Wall Street in the wake of an earnings call by Walt Disney Co. CEO Bob Iger acknowledged the toll taken by cord-cutters on the company’s brands, including ESPN, Landgraf said, “Wall Street’s reaction this week was way over the top. There was nothing Bob Iger said in his call that I haven’t seen coming and haven’t been preparing for, for years.”