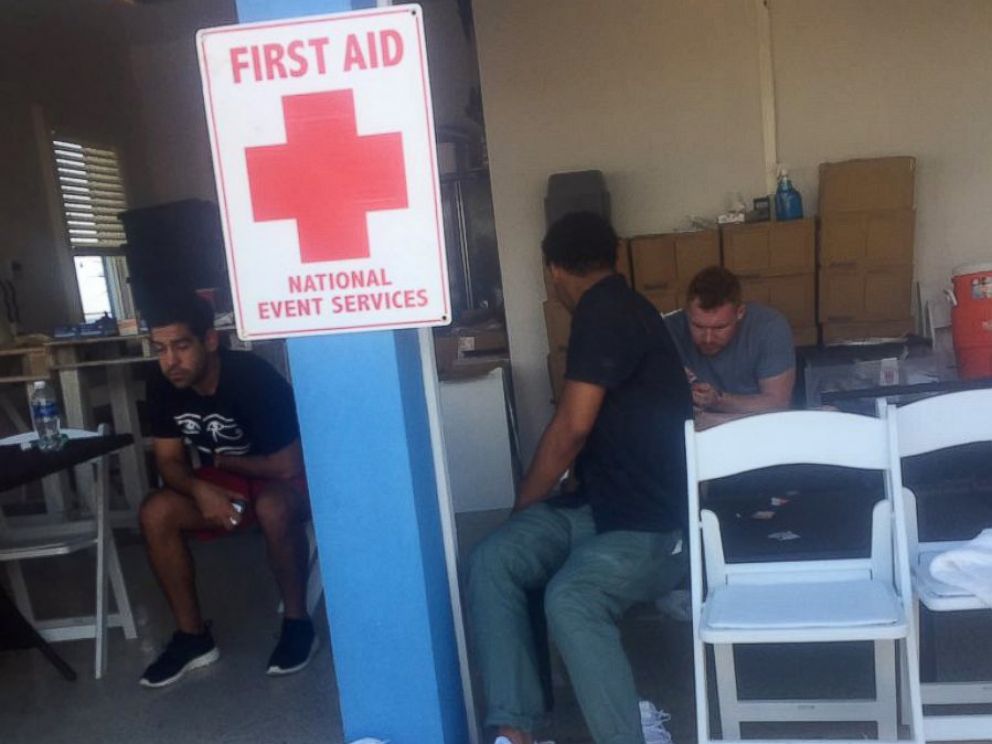 A luxury music festival in the Bahamas, touted by Kendall Jenner, has been postponed amid an onslaught of complaints from attendees on social media (and those gripes are, in turn, being widely mocked on social channels).

“So Fyre Fest is a complete disaster,” tweeted William N. Finley IV, who documented his experience on Twitter with a series of photos showing “mass chaos,” “no villas” and a “disaster tent city.”

Alleged guests also aired complaints in a Reddit thread. Gripes ranged from being locked out of a first aid tent to overhearing what sounded like gunshots. “Is there anyone nearby who’s willing to stage a rescue mission??? I just want to get my gf and get the **** out of here!,” wrote user Freddy_Flamo.

The official website for the Fyre Festival posted a statement at midday Monday that reads, “Fyre Festival set out to provide a once-in-a-lifetime musical experience on the Islands of the Exumas. Due to circumstances out of our control, the physical infrastructure was not in place on time and we are unable to fulfill on that vision safely and enjoyably for our guests.”

It was touted as a luxury festival, with some VIP packages on sale for up to $250,000, some packages including a private yacht. The band Blink-182 bowed out at the last minute. Staffers were few and far between.

Ja Rule was one of the event’s organizers, for which the the lowest ticket price was $450. The package that was being pushed the most, however, was the $12,000 one.

Trevor DeHass, another attendee, also tweeted about his time spent at the festival, sharing an image of two slices of bread, a slice of cheese and small salad for dinner Thursday — not up to the upscale standards advertised for the all-inclusive weekend.

The festival lineup was scheduled to include high-profile acts like Ja Rule — who was also one of the event’s organizers — Daya and Tyga.

Below are tweets documenting the chaos:

So Fyre Fest is a complete disaster. Mass chaos. No organization. No one knows where to go. There are no villas, just a disaster tent city. pic.twitter.com/1lSWtnk7cA

Night has fallen. We have no luggage.

Fyre Fest doesn’t have beer. They “ordered it late” but they assured us it will be here tomorrow. #fyrefestival

@FyreFraud Just a reminder of what “The Duo” was originally sold as pic.twitter.com/gKz90zNBvu

Here’s the “culinary experience” we got for our artists pass at Fyre Festival. pic.twitter.com/Kk9q9uvkX0

One of the kitchens at Fyre Festival. #fyre #fyrefest #fyrefestival pic.twitter.com/gQIpwxrw6S

The “catering” (which cost extra) was a slice of untoasted bread, two slices prepackaged cheese, and a side salad. pic.twitter.com/BoKxWAMI5i

A view of the luxury food court with some luxury school bus transportation at Fyre Festival. #fyre #fyrefestival pic.twitter.com/XL3PtRw8q0

The infrastructure was nonexistent, and the festival staff either a skeleton crew or MIA. pic.twitter.com/8Gh6NevsFI

“I feel like I’m in that alien movie in South Africa” guy at Fyre Fest, presumably referring to the movie District 9. #fyre #fyrefestival

It is complete &total chaos, every1 is running around frantically looking for answers &none of the staff can help. Even they are in the dark

Luxury trash receptacles at the luxury bar (with no beer). No shoes, no shirt, pajama pants, no problem. #fyrefestival #fyre pic.twitter.com/PojJtfHlqL

These are the secure lockers at Fyre Fest. They forgot to tell us we needed locks. #fyrefestival #fyrefest pic.twitter.com/Tqyjqbg2Gy

UPDATE: they are having us sign papers for full refunds. They are just pieces of computer paper but I mean…refunds pic.twitter.com/oNa8EIojl1