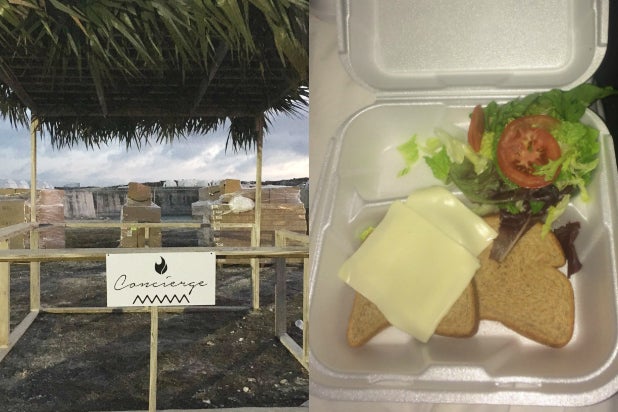 Less than two days in, the high-end music weekend Fyre Festival turned out to be an unmitigated disaster, and Twitter is having a field day.

“I just Googled ‘Fyre Festival’ and I can’t stop f—ing laughing,” one user wrote. “Oh, Jesus. If you live for train wrecks, STRAP THE F— IN.”

Founded by the rapper Ja Rule and tech entrepreneur Billy McFarland, and promoted by celebrities like Kendall Jenner and Emily Ratajkowski, Fyre Festival was billed a posh weekend getaway in the Bahamas. Tickets went for as much as $12,000. However, once ticket-holders arrived on the private island, what greeted them was less than luxurious.

The bare-bones accommodations — including “FEMA tent” living quarters and ham and cheese sandwiches — had festival-goers fleeing in droves on Thursday, only to discover that they’d be trapped at the airport waiting for flights.

“We thought it would be four nights with good music. They branded it as the next Coachella,” one attendee who paid $4,000 for a VIP package said in an interview with the Washington Post. “We’d rather be sleeping at an airport,” he said, “rather than in a tent on a rocky outcropping near a Sandals resort.”

While attendees have taken to social media to air their grievances about the event, others have had a field day making fun of festival goers who were tricked into paying thousands of dollars to basically get stranded on an island.

“Omg I just found out about fyre festival and I never want it to end,” wrote one user on Friday. “Explain how Fyre Festival is worse than any other music festival,” deadpanned another.

But maybe there’s a silver lining.

“A take,” wrote SPIN editor-in-chief Puja Patel. “The Rich Kids of Fyre Fest got what they wanted in the end — a one-of-a-kind experience to share on social media to the wonder of all.”

I just Googled"Fyre Festival" and I can't stop fucking laughing.

Oh, Jesus. If you live for train wrecks, STRAP THE FUCK IN.

A take: The Rich Kids of Fyre Fest got what they wanted in the end–a one-of-a-kind experience to share on social media to the wonder of all

"the people at fyre fest were in real danger!"

literally who the hell cares

As long as a Fyre Festival or Juicero type thing happens at least once a week, I am willing to stay alive indefinitely

pumped for weekend 2 of fyre fest baby lets get it!!

Explain how Fyre Festival is worse than any other music festival.

i hope the fyre festival turns out to be battle royale

Me reading tweets from ppl at fyre festival pic.twitter.com/s41YpDft4e

Ja Rule did warn everyone that he wants lots of money, and people would die in exchange for it pic.twitter.com/eCGvhh3pgS