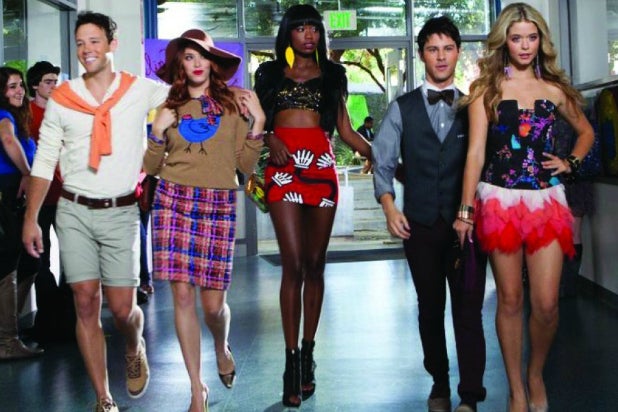 You don’t want to knock a movie for being too nice. Especially when it surrounds a trio of 2013 Mean Girls sporting their newest must-have handbag – the gay pal – which could come off as exceptionally cruel.

The freshest acronym/fashion accessory/possible human being, the G.B.F. (Gay Best Friend) gives you instant fabulousness. They read about it. In a fashion magazine.

Teenage girls, even popular ones, aren’t often as cool as the Fanning sisters. And I like that the film is nice. The small issue in “Jawbreaker” director Darren Stein’s bubbly, cartoonish and often touching “G.B.F” is that you’re hoping for a little more… edge. A little less “Glee” and a little more “Absolutely Fabulous,” because, we all know that the “fabulousness” of Jennifer Saunders and Joanna Lumley is fraught with absurd hilarity. And an unusual yet familiar humanity.

But that’s not fair. Saunders and Lumley were playing grown-up fashionistas who wouldn’t need — and, in fact, would compete with — any sort of G.B.F. Unless it was Lacroix, sweetie. (By the way, Christian Lacroix, has been married since 1974 but has called himself openly bisexual.  B.B.F.?)

Anyway, I’m going back in time. Back when women with gay best friends (usually in college) were called the derogatory “fag hag.” I’m speaking more to the tone of the picture which, while refreshingly sweet, could use some sharper rim-shots among so many quick-talking zingers (some very funny, some a bit forced).

But I’m splitting hairs. The picture’s progressiveness is heartening. (Its undeserved “R” rating, “for sexual references,” is disheartening.) “G.B.F” places its gay characters front and center, it allows them to kiss, it allows them an awkward night together, it allows them crushes and some heartache, it allows them gay and straight friends and a friend whom everyone thinks is gay but isn’t, and who doesn’t care if they think so and uses it to his advantage for some… what’s the acronym for Mormon vagina?

The picture’s lead, Tanner (Michael J. Willett), is closeted, though his closest friends know the truth. He’s a handsome, kind, nurtured, comic book fan who doesn’t see himself in stereotypical gay terms, whatever the hell that means anymore. He’s just himself.

But when the three most popular girls in school — the talented Caprice (Xosha Roquemore), the aforementioned Mormon square ‘Shley (Andrea Bowen) and the almost obnoxiously named blonde bombshell Fawcett (Sasha Pieterse) — seek Prom Queen celebrity, they search for that essential accoutrement, the G.B.F. After Tanner is revealed from an app called “Guydar,” thanks to Tanner’s equally-closeted best friend Brent (Paul Iacono), he’s discovered. This leads the girls to Tanner, making him the school’s coveted G.B.F.

Friends break up, makeovers happen, accidental coming-outs occur, Tanner is unsure of his new “friends,” Brent gets mad and then… prom. I won’t go any further, but much happens, resulting in a well-meaning speech and some nicely observed moments in between.

It’s satisfying to see a movie where stereotypes are taken apart (even the popular girls hide some depth) and that certain parents don’t find the idea of a homosexual son an abomination (though of course many kids around the world, who aren’t lucky enough to have parents so accepting, suffer in needless shame).

Some parents are even going for it a little too hard, like when Brent’s mother (Megan Mullally) humorously watches “Brokeback Mountain” with him as a bonding exercise.  Once Heath and Jake crawl into that tent, it’s embarrassing for any teenager — no matter who you are, gay or straight — to watch a sex scene with your mother. But she’s trying.

And that’s, to go back to my original point, nice. And that “Brokeback Mountain” moment is a hot scene. Hopefully Brent will watch it by himself in his room later that night.