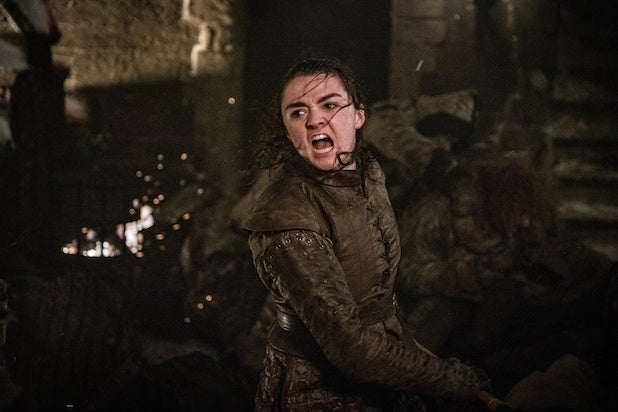 (Warning: This post contains spoilers for the third episode of “Game of Thrones” Season 8, titled “The Long Night”)

There is no doubt that Arya Stark was the MVP of Sunday’s “Game of Thrones,” the long-awaited Battle of Winterfell episode that saw the youngest Stark girl unexpectedly do in minutes what her elder brother (kinda) Jon Snow has been trying to do for seasons: kill the Night King and his entire army.

However, there was doubt in actress Maisie Williams’ mind when she first learned the twist ending during a Season 8 table read that fans would accept that as the way it should have gone down.

“It was so unbelievably exciting,” Williams said in an interview with Entertainment Weekly published Sunday. “But I immediately thought that everybody would hate it; that Arya doesn’t deserve it. The hardest thing is in any series is when you build up a villain that’s so impossible to defeat and then you defeat them. It has to be intelligently done because otherwise people are like, ‘Well, [the villain] couldn’t have been that bad when some 100-pound girl comes in and stabs him.’ You gotta make it cool. And then I told my boyfriend and he was like, ‘Mmm, should be Jon though really, shouldn’t it?'”

Arya spent Sunday’s episode fighting alongside the troops behind the walls of Winterfell and taking a pretty serious blow to the head that shakes her up for a good chunk of the 1-hour, 22-minute installment. She only goes off on her own to kill the Night King when Melisandre (who has made a surprise appearance at the Starks’ ancestral home to aid the team in their battle) reminds her of the “brown eyes, blue eyes, green eyes … eyes you’ll shut forever” prophecy she gave her back in Season 3, and triggers the idea in Arya’s head.

“When we did the whole bit with Melisandre (played by Carice van Houten), I realized the whole scene with [the Red Woman] brings it back to everything I’ve been working for over these past 6 seasons — 4 if you think about it since [Arya] got to the House of Black and White,” Williams told EW. “It all comes down to this one very moment. It’s also unexpected and that’s what this show does. So then I was like, ‘F–k you Jon, I get it.'”

Based on the overwhelming reactions of support for Arya’s brave acts, we’re pretty sure most “GoT” fans would say “not today” if Williams asked if they are upset about how things turned out.