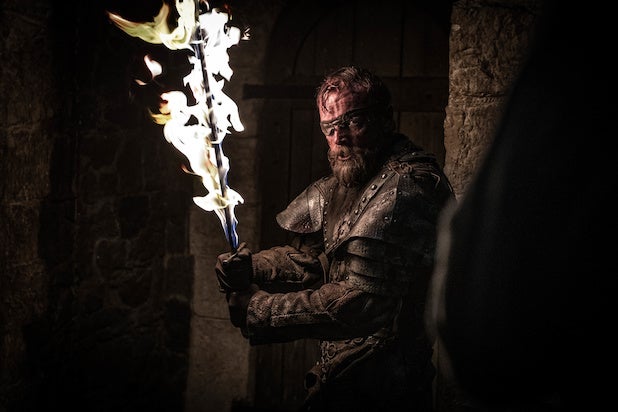 Beric Dondarrion died yet again on Sunday’s “Game of Thrones.” And per, Melisandre the man blessed with a fire sword ain’t coming back with help from the Lord of Light this time, as his entire purpose for living — to protect Arya (Maisie Williams) during the Battle of Winterfell so she could kill the Night King — has now been fulfilled.

TheWrap spoke with Richard Dormer, who plays Beric, about shooting his final scenes for the series, in which he says he became a human “Beric-ade” for the young Stark girl.

“It was such a fast, ferocious two days filming that sequence in the corridor,” Dormer said. “But I remember every wound, every puncture. And the first two, there’s one in his leg and he pushes on. Then he gets one in the stomach and you can see, Beric, I think he’s going, ‘I can still survive this. I’m still OK. I’m not dead.’ But it’s when he rushes ahead of Arya and gets pinned to the wall and he gets stabbed in the chest, there is this little moment where it’s almost acceptance. He looks like he’s just a man who knows, ‘This is it.'”

Also Read: 'Game of Thrones': Melisandre Actress Carice van Houten on That Arya 'Eyes' Prophecy, Going Out Like a 'Boss'

“And also he takes all these wounds and he can still keep going after 17, 18 stab wounds,” he continued. “So the important thing was to make it look realistic, you know what I mean? His super-human strength comes from his belief. But he was a dead man walking and it was important his final steps look like a man whose life is ending. And his whole life is summed up in that corridor.”

Because Beric had already died half a dozen times before finally going out for real in a blaze of glory, we asked Dormer to tell us what reaching this actual death felt like in comparison for him.

“Oh, it was — oh my God, what was it like to die for the last time? Do you know what I think that’s the only question I don’t have an answer for,” he said. “I don’t know it, was weird, it was just very strange. I felt kind of emotional watching Episode 3 and seeing it finally happen and knowing he wasn’t going to get up again. It was very strange.”

As for the logistics of shooting “The Long Night,” an episode that took 55 nights’ worth of filming to complete, Dormer says that part was rough.

“The thing I remember most is very cold feet because our boots weren’t waterproof, they were just suede and leather, so they would fill up with muck and our feet would literally be blocks of ice,” Dormer said. “And I remember not being able to see anything, because I had the eyepatch on and the flaming sword and things coming out of the darkness. It was pretty scary. Well, Richard finds it scary, but Beric doesn’t find it scary. Beric, it’s just another day for Beric.”

Also Read: 'Game of Thrones' Breaks Series Record With 17.8 Million Viewers for the Battle of Winterfell

Talking about that flaming sword, what are we going to do without that weapon going into the final three episodes of the season, seeing as that power didn’t come from the sword, but Beric via the Lord of Light.

“I would be surprised if anyone else could do it because Jon Snow [Kit Harington] is not a follower of the Lord of Light. Maybe the sword might light up for him, but it was something both Thoros and Beric could do because they were believers.”

When we asked about Arya’s future after her triumph in that battle, Dormer said: “the Lord of Light is obviously interested in her, and maybe she’s the next priestess… who knows.”

Just as Beric didn’t know his life’s purpose, Dormer didn’t find out why he was sticking around for so long until receiving the script for Episode 803.

“Yes, the entire time I was playing Beric, I think that came through in the acting, is that I just kept smiling and thought ‘I have no idea why I’m here. I’m just here because Dan and David keep me going,'” he said. “But I literally did not know. I only knew when I read the script a couple of days before the read through what the purpose was and it was a surprise, but I also knew it made perfect sense.”

“Game of Thrones” airs Sundays at 9/8c on HBO