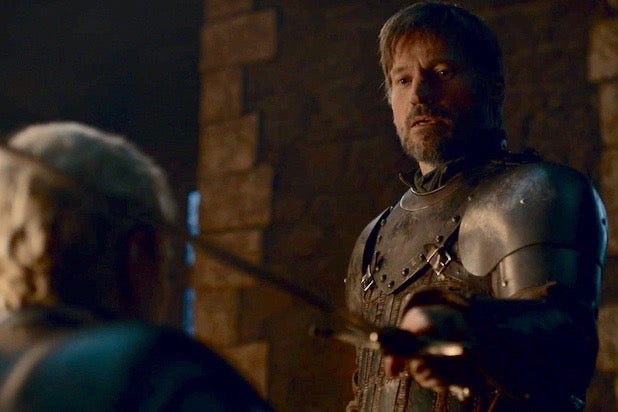 (Warning: This post contains spoilers for “Game of Thrones” Season 8, Episode 2, titled “A Knight of the Seven Kingdoms”)

Brienne of Tarth’s life-long dream of becoming a knight was finally realized on Sunday’s “Game of Thrones” — and it’s all thanks to her good friend Jaime Lannister. In the episode, aptly titled “A Knight of the Seven Kingdoms,” the Kingslayer turned the Lady into a Ser and left not one dry eye on the internet.

TheWrap spoke with Nikolaj Coster-Waldau, a.k.a. Jaime Lannister himself, about last night’s “GoT” — the second of the HBO series’ six-episode eighth and final season — and why Jaime chose to knight Brienne (Gwendoline Christie). And also, if that is even a thing he had the right to do in the first place.

“It’s a real thing in that world and I also think that he’s happy to do that,” Coster-Waldau told us. “I mean, it’s clearly a woman that he has enormous admiration for and just a human being that he admires. And we saw a scene earlier [in the episode] where he asks if he can serve under her, because he knows she is amazing at what she does and she’s a great warrior and she has all the qualities and is the most deserving of the title of knight of anyone in that world. So I think it’s obviously an act of love.”

Also Read: 'Game of Thrones' Season 8, Episode 3 Preview: The Dead Have Arrived and the Living Won't Back Down (Video)

But the actor says the idea to knight Brienne wouldn’t have occurred to Jaime without a little help from Brienne’s not-so-secret admirer.

“And I don’t think he thought of it, but then when you hear Tormund Giantsbane go, ‘Well, why can’t a woman be a knight?’ and then she goes, ‘tradition,’ and he says ‘f–k tradition’ — it kind of, I think that inspires him, that moment,” Coster-Waldau said. “And it’s a beautiful scene, and when I saw it yesterday — because we’re not allowed to see anything — I just thought Gwendoline was absolutely incredible. I mean it was incredible when we shot it, but you do so many takes and so many angles, so to see the final performance was just beautiful.”

Alright let’s talk about this whole “act of love” thing. Does that mean Jaime is actually in love with Brienne — like love love — and that she is in love with him, too?

“I mean, we have another four episodes to go, so I think that the less I say about them the better,” he told us. “You know, what she did in the beginning — she saved his life, if you will, in the beginning of the episode by vouching for him and clearly there’s a lot of respect [there]. And the thing is, I just wanna say watch the show and see what happens because the less I say the better.”

Fine, let’s move on to the whole Battle of Winterfell that takes place next Sunday, since everyone at the Starks’ ancestral home spent last night’s episode waiting for the possibility of death, as the Army of the Dead were literally about to arrive. And the Three-Eyed Raven formerly known as Bran Stark (Isaac Hempstead Wright) didn’t give us a ton of hope that our heroes succeed in their fight against the Night King, as he suggested to Jaime there is no “afterwards” when the battle is done.

“Well, Bran can see the past and I think based on all his knowledge, he’s clearly open to the possibility that we won’t prevail, that we won’t win,” Coster-Waldau said. “And I think Jaime obviously thinks this kid is disturbing on many levels, but what he says there is not what you want to hear. It would kinda be nice if he could say, ‘Well, when the battle is over we’ll have a second discussion about this.’ But that’s not what he says, he just says, ‘Listen, you’re probably gonna die. Keep that option open now.'”

We couldn’t get Nikolaj to tell us how many people kick the bucket during the battle, but he did say this: “Clearly, we’ve seen what this enemy is capable of so, I mean, I wouldn’t — without saying anything — I wouldn’t put money on no one being hurt. And that’s about all I will say.”

But he did speak to the actual filming of the episode, which all true “GoT” fans know by now took 55 nights to complete.

“Well I can say that shooting, on purely a logistical and technical level, just working with Miguel [Sapochnik], the director [of Episode 803], and what him and the crew came up with and pulled off was breathtaking,” he said. “And even though it was a tough shoot you were so inspired by going to set and being part of something that was so massive. And I can’t wait to see it, I really cannot wait to see it, because the crew just worked their asses off and I think it will show.”

Don’t worry, TheWrap dove back into “A Knight of the Seven Kingdoms” before we wrapped up with Coster-Waldau, as we just had to ask about Jaime’s time spent around the fireplace with Brienne, Tyrion (Peter Dinklage), Tormund (Kristofer Hivju), Podrick (Daniel Portman), and Davos (Liam Cunningham).

Also Read: 'Game of Thrones': Can Any Knight Really Make Anyone Else a Knight?

“Just shooting that sequence we had a great time because it is that silence before the storm and also, in many ways, we’ve all spent a lot of time together so that influenced the scene,” he said. “I also think Bryan Cogman, the writer of this episode, he really captured how this could very well be the last time we see all of these characters. And there were so many wonderful surprises. The surprise of Daniel Portman having such an amazing voice. It really was just a special sequence and then [director] David Nutter just capturing it and the balance there, it never becomes too sentimental. It has a sentimental tone about it because you kind of know, ‘We’re probably all going to die tomorrow.’ And that’s not a spoiler, that’s just the truth — we could very well all die. And he captured that beautifully.”

Coster-Waldau especially enjoyed the brotherly bonding Tyrion and Jaime got to partake in after so much time spent apart, as the two “really do love each other.”

“They are the closest out of anyone in that family so it’s nice to see them have a good moment together after what they’ve been through, what with Tyrion killing their father and their sister trying to kill– I mean it’s not easy to go to family dinners at the Lannisters because they always end up arguing,” Coster-Waldau said, laughing. “So it’s nice to have a quiet moment to share a glass of wine and share some stories. So it was beautiful to shoot that.”