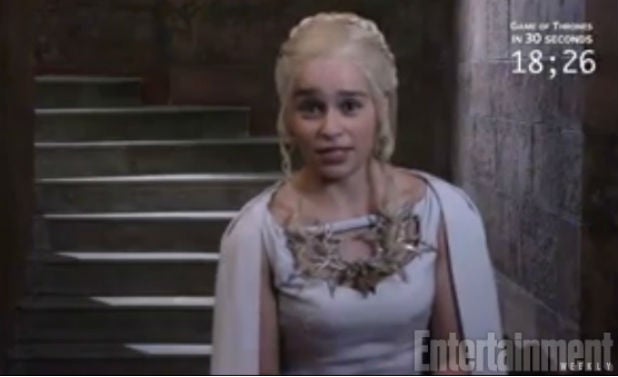 Four seasons and thousands of pages of the complex historical drama has been broken down into 30-second soundbites by the “Game of Thrones” cast, but one of them got a little off track.

“Tyrion is a science chemistry teacher at a high school and finds this guy, Jesse Pinkman, and they get a Winnebago,” Dinklage said dryly, slipping into Walter White’s fictional life story. “Then they get involved with a fried chicken place.”

His co-stars took more direct routes in catching viewers up on the previous four seasons of the groundbreaking drama, however.

Clarke, as the exotic last survivor of the House Targaryen, simply said: “Dragons! Daenerys wins,” with a hearty thumbs up.

So. You’ve watched Sunday’s “Game of Thrones,” and now you feel bad for Joffrey, don’t you? Well, stop. He was a monster. Here are just a few of the terrible things he did, from least to most terrible.

1. Had a direwolf killed.
When Joffrey first met the Starks, he tried to show off to Sansa by cutting the butcher boy's face for daring to practice sword-fighting with Arya -- even though Arya had asked the butcher's boy to practice. Arya hit Joffrey to help the butcher's boy, and Joffrey turned on her and called her the C-word while threatening to kill her. Her direwolf, Numeria attacked, as direwolves tend to do. So Joffrey demanded the direwolf die. Total bastard, right? But this was the least awful of his awful deeds.
View In Gallery