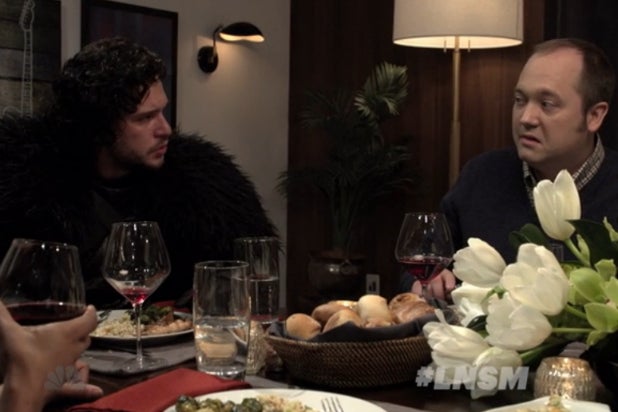 Jon Snow is a complete buzzkill.

The “Game of Thrones” character ruined a recent Seth Meyers-hosted dinner party by being a total downer, insisting to the other attendees that “Winter is coming,” despite their optimism about the spring.

“The snow will fall a hundred feet deep, the ice-wind will howl out the north,” the Kit Harington character said, “and sun hides its face for years and little children will all be born and die in the darkness.”

He also warned of the White-Walkers and referred to himself as a “bastard” a few times. After talking too much about his father’s beheading, Meyers pulls Snow aside to teach him some dinner party decorum. The lessons don’t take.

It doesn’t get much better when the HBO character talks about his dead brother, the miserable Wall and former love Ygritte (Rose Leslie) — but one of Meyers’ staffers starts to fall for Snow when he acts out the entire story of the George R.R. Martin novels.

The two later bond over their love of Tom Hanks-Meg Ryan movie “You’ve Got Mail” during a game of charades.

Also Read: ‘Game of Thrones’ Star Maisie Williams to Guest on ‘Doctor Who’