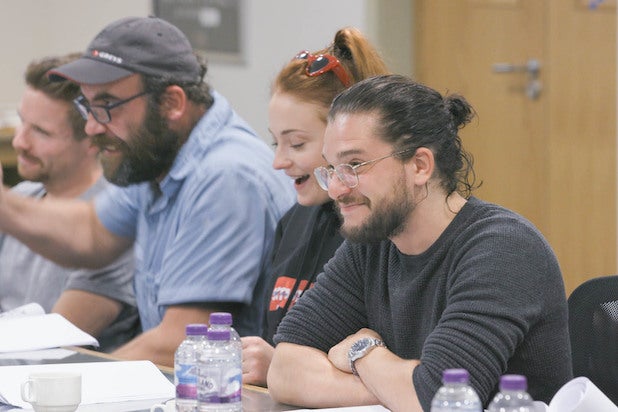 “Game of Thrones” fans who tuned into “Game of Thrones: The Last Watch” on May 26 — the Sunday after the HBO fantasy epic’s series finale — to find out more about stars like Emilia Clarke, Kit Harington, Sophie Turner, Peter Dinklage, Lena Headey and Maisie Williams probably didn’t get what they were hoping for, as the two-hour final season doc focused on a different set of stars.

And that’s because documentary filmmaker Jeanie Finlay and “GoT” executive producer Bernie Caulfield wanted to introduce viewers to the “unsung heroes” of Westeros that made their favorite show a possibility over the years, including Andrew McClay (an extra who played a Stark guard for several seasons), Del Reid (the head of the show’s snow department) Leigh McCrum, (the set’s coffee van manager), Vladimir Furdik (stuntman-turned-Night King) Sarah and Barrie Gower (the prosthetics team) and Naomi Liston (the series’ location manager).

“I think that Bernie Caulfield really was the driving force behind the documentary happening,” Finlay told TheWrap Monday. “And she was really keen on focusing on the unsung heroes, so the people out in the back. You know there is like 2,000 crew members working on ‘Game of Thrones’ and the actors are a tiny, tiny percentage of that. So I made a choice to make the Kit and Emilia scenes [included in the film] the ones that also show the people that I was focused on outside of the cast, because [Kit and Emilia’s] stories overlapped with the characters I was following. So I treated it like it was a normal documentary, in that everything plays off each other.”

“You know, Emilia’s story crisscrossed with those working in hair and Kit’s story overlapped with Andy the extra, so it made sense to do that rather than have the cast in every single scene,” she continued. “Also, that was important to make something that felt distinctly different and had different voices. So I just was really on the lookout for people that may have never spoken before and smaller, intriguing people.”

Like Reid, the man in charge of making sure winter is constantly coming in Westeros.

“When I found out there was a Head of Snow, I was immediately intrigued, because when you think of ‘Game of Thrones,’ you think of snow and winter is coming,” Finlay said. “And then I wanted to cover stunts and so when I discovered that Vlad was also the Night King, it just seemed too delicious a story not to tell. And I always wanted an extra and when I found Andy, I just knew I’d found the right person.”

Finlay, who told TheWrap she shot roughly 950 hours of behind-the-scenes footage over 14 months while the final season was filming, told HBO and “Game of Thrones” showrunners David Benioff and Dan Weiss this is the world she wanted to explore when she signed on to make “The Last Watch.”

“I was really interested in what it means to build a world and then how do you say goodbye to that,” she told us. “And I went out to LA to meet with the showrunners, David and Dan, and I just talked about how ‘Game of Thrones’ is about seven families fighting for the Iron Throne, I wanted to see if I could find seven unsung heroes in seven different departments and find an emotional way into ‘Game of Thrones.’ And I was interested in something that was so different to traditional behind-the-scenes docs. So something that felt really intimate, finding real stories among all the fantasy of Westeros.”

Finlay also explained to TheWrap the reason why she didn’t address the strong reaction to the final season itself in her doc, which is simply because they finished shooting long before it aired.

“We wrapped filming the last day that the crew wrapped filming, so that was July 2018,” she said. “And then I delivered the finished film two weeks before the first episode went out. So my editor and I were invited out to watch the first episode at Radio City. Yeah, it’s quite interesting, some people have said, ‘Why didn’t you address some of the things in the final season?’ Well, cause we didn’t see it finished. We had a really punishing schedule for editing, seven months every day. And then we had a month of post-production.”

“So we were done and dusted before the first episode aired and so we could watch it and enjoy it and it was really surreal to watch because many of the scenes you watched without the effects in play when you’re on set,” Finlay continued. “So partly you are watching it just thinking, ‘Oh my God that’s how it looks fully made.’ Or you remember you had stood there when they filmed it, like I was there but watching [director] David Nutter pretending to be a dragon and growl when Kit and Emilia were kissing.”

“Game of Thrones: The Last Watch” is available on demand for HBO subscribers and for streaming on HBO Go and HBO Now.