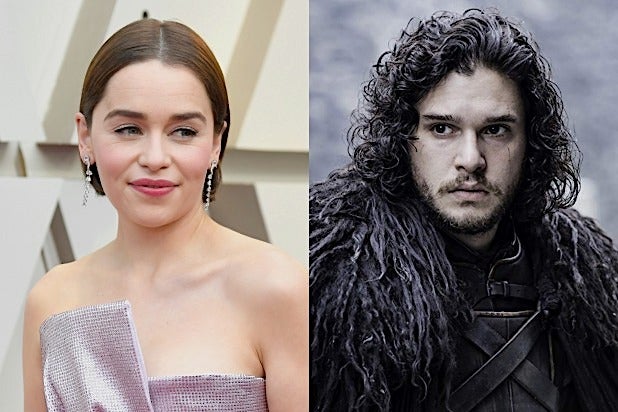 “Game of Thrones” star Emilia Clarke hit the streets of Time Square to spread the word about the ultimate opportunity for fans of the HBO hit… and what better way to stand out in the crowd then being disguised as Jon Snow?

“There’s still time for you to meet me for the final episode of ‘Game of Thrones’ ever,” Clarke said in a video posted Friday. “We’ll meet up, talk about the show, take some photos together, and then you’ll get to see how it all ends at a private screening. And since this is the ‘Game of Thrones’ experience to literally end them all, I thought, what better way to spread the word than to hit the streets of Times Square undercover as… drum roll, please… Jon Snow!”

Donned in a black, wavy wig and a god-awful beard and mustache, Clarke turned heads, as she played tourist in the rainy Big Apple.

“I was just wondering, which way to the Wall?” she asked a newsstand attendee. “Just anywhere north, really.”

After exchanging glances with other Daenerys and Jon strollers, and attempting to recruit Batman, Superman and Zorro to fight the Army of the Dead, Clarke said that “GoT” fans can enter for the chance to meet her at a private screening of the series finale by going to omaze.com/emilia and making a donation to her charity, SameYou.

“The very best part of all of this is that every donation helps increase rehabilitation access after brain injury and stroke,” added Clarke, who suffered two brain aneurysms between 2011 and 2013.