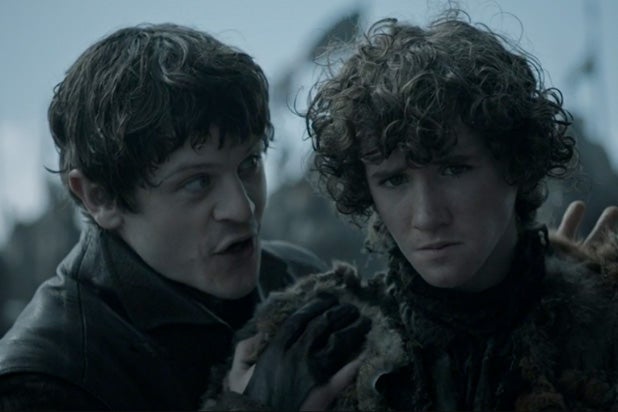 (Spoiler Warning: You shouldn’t read this without watching this week’s episode of “Game of Thrones”)

Last month, Iwan Rheon discussed on a British morning show how he wanted his character, Ramsay Bolton, to suffer the most gruesome death imaginable. “I’d quite like a dragon-related death in some brutal dragon encounter, fighting a dragon and losing,” he said.

As we found out with “Battle of the Bastards,” Rheon already knew Ramsay was getting a death that was far more appropriate, not to mention infinitely more satisfying for the “Game of Thrones” fans dying to see the Bastard of Bolton and his rotten house get eradicated.

After killing Rickon Stark and nearly crushing Jon’s forces, Ramsay was defeated by the knights of House Arryn, who arrived a la Gandalf in Helm’s Deep to trample the Bolton forces. Ramsay beat a hasty retreat to Winterfell, only for the Starks to bust in and for Jon to, at long last, give him his deserved beating.

Also Read: 'Game of Thrones': The Women Were Right and the Men Were Wrong in 'Battle of the Bastards'

Jon snow is officially #BLESSED and Sansa knows how to save the day. #GameofThrones

Jon Snow wiped that grin off of Ramsay’s face. With a fist. Or 2. Or 3. #GameofThrones

This was me during that #JonSnow scene. #GameOfThrones #GoT pic.twitter.com/6AhUDkN3AI

But while Jon got to beat Ramsay to a bloody pulp, it was Sansa who got the honor of delivering the killing blow. (And the pen was mightier than many swords.) After all, she was the one who wrote the letter to Littlefinger that got House Arryn to save the day.

Then Sansa got the ultimate revenge: she killed Ramsay with his own hungry hounds… the same hounds he used to kill his newborn half-brother.

Ramsay: *screams as his hounds eat him alive*

Us, when #Sansa showed up with the rest of the crew…then fed Ramsay to his own dogs. #GameOfThrones #ThronesYall pic.twitter.com/NuGzxXL8Oo

fat walda from the beyond when sansa fed ramsay to his own dogs pic.twitter.com/dBKXOPIiXU