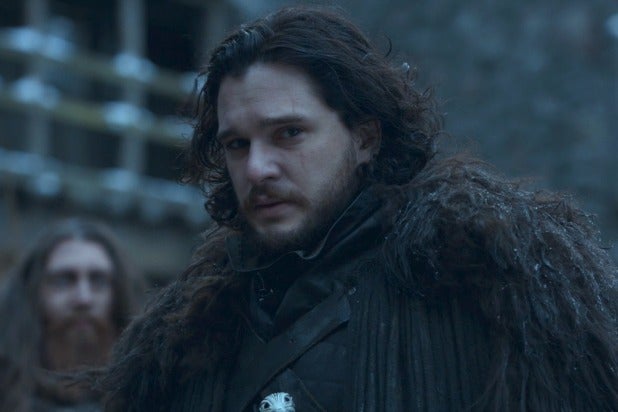 We’ve finally arrived at the end of “Game of Thrones” after nearly a decade, and Westeros will never be the same after a crazy sequence of wars and a massive battle against a bunch of zombies from the far north. But the story is only really over for us as viewers — these characters’ lives will go on.

And of all the specific character endings, perhaps the most interesting is the fate of Jon Snow (Kit Harington). I mean, yeah, Arya (Maisie Williams) gets the coolest send-off as she heads out on the Sunset Sea to find out what’s west of Westeros, but Jon’s wrap-up is more surprising and intriguing. He was banished to the Night’s Watch as a compromise punishment for having killed Daenerys, but he appeared to have gone AWOL immediately, as the final scene of all of “Game of Thrones” saw him leading a group of wildlings back beyond the Wall.

But more than that, it’s extremely interesting that Jon would be forced to take the black again at this point in time. Or, more specifically, it’s interesting that the Night’s Watch is still a thing at all that Jon could be banished to. After all, as far as we know, all threats from beyond the Wall have been dealt with. The Night King and all the White Walkers are dead. Some or all of the remaining wildlings are heading north again, sure, but you don’t need a gigantic wall and a standing army to deal with just them, and they’re now essentially led by someone (Tormund) who is for all intents and purposes best friends for life with… Jon Snow.

Also Read: Will Any of the 'Game of Thrones' Spinoffs Show Us What Happens After the Finale?

Tyrion delivered a sort of thematic explanation when he delivered the news that Bran had decided to send Jon to the Night’s Watch instead of allowing Grey Worm to execute him: “The world will always need a place for bastards and broken men.” Which, sure, that’s true. It’s just not clear what exactly the Night’s Watch will be watching since the threat that sparked the group’s formation and the building of the Wall has been defeated. But I can see the wisdom of keeping it alive as a sort of penal colony/refuge for outcasts that’s far away from everything.

There’s also another possibility for the continued existence of the Night’s Watch: Bran knows something we don’t. He’s still the Three-Eyed Raven who can see the entire history of Westeros and everything that’s going on in the world at any given moment.

Maybe he saw something that warrants having the Night’s Watch continuing to keep watch from the Wall. What that threat could possibly be is anyone’s guess. More White Walkers? A secret army of evil Children of the Forest? Something as yet unheard of from north of the edge of the map of Westeros?

Anything is possible. We will probably never have an answer to this question, because “Game of Thrones” is over and it’s not likely that any of the spinoff shows that HBO is working on will follow Jon and the wildlings north. According to BBC, Kit Harington straight up says he definitely wouldn’t return to “GoT,” even for a single scene, because “he’s enjoying stage-work too much.”

Obviously, he might change his mind in five years, but for now, that sounds final. So we’re probably just going to be left wondering for the rest of our lives.