There final season of “Game of Thrones” has finally — finally — begun, and the Great War is imminent. The Night King’s army of the dead having passed through the Wall and headed south at a troubling pace, though series creators David Benioff and DB Weiss aren’t jumping straight into that war just yet, even though we’ve only got six episodes this season. The season premiere episode, dubbed “Winterfell,” saw most of the major characters getting to their places before the first big confrontation with the White Walkers and their undead forces.

One of those characters, Gendry (Joe Dempsie), spent the episode getting back to doing what he does best — working as a smith making weapons. Gendry is in Winterfell now, helping to turn cart fulls of dragonglass ore into usable weapons to use against the dead. And Arya (Maisie Williams) wanted to take advantage of Gendry’s skills as a smith to get something for herself.

But Arya didn’t want just any old thing that Gendry turned out. She wanted something special. So when she and Gendry finally reunited so many years after their adventures wandering around the middle of Westeros, they flirted a little bit and Arya made her request. She gave him a piece of paper with an interesting design on it, which you can see right here: 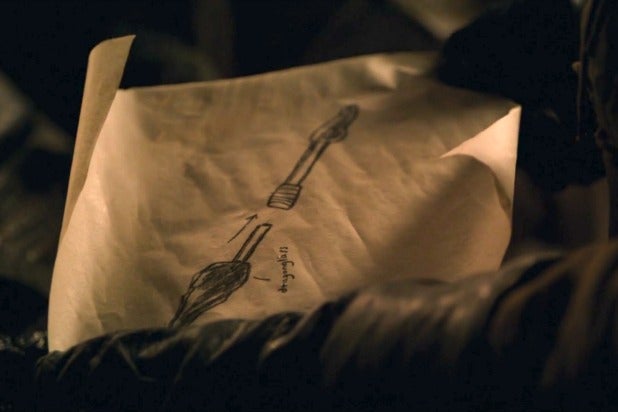 What it looks like is a sort of modular spear with a dragonglass tip, with a shaft that can be split in two on demand. We know the spear tip is intended to be dragonglass because “dragonglass” is the the only word written on the page. This sort of modular design is unusual, but it makes perfect sense for Arya because she’s so small and because of the Braavosi fighting style she uses.

A spear that could be split in half like that would allow for a lot of flexibility in how she wants to use it. And the butt end of the spear also looks like it could do some damage — so when it’s split, Arya could use the bottom half as another weapon.

The full spear also generally looks smaller than a normal one, given the proportions of the dragonglass tip. It may not be a proportional drawing but, again, it makes sense for Arya to not want to use a full length spear because of her size.

We actually got a very brief glimpse of Arya using a spear in of the season 8 trailers (about 1:25 in), so presumably she’s using this thing.

This does not appear to be any kind of legendary weapon design of the “Game of Thrones” and “Song of Ice and Fire” universe, or at least not one that we’ve heard of before. Or maybe it just isn’t legendary yet, and will become so after Arya makes use of it. And I’m excited to see it in action, because with the way Arya fights, this dragonglass spear looks like a whole hell of a lot of fun.

Only five episodes of “Game of Thrones” left, ever, so I’m guessing it won’t be long until we get to see this thing in action.