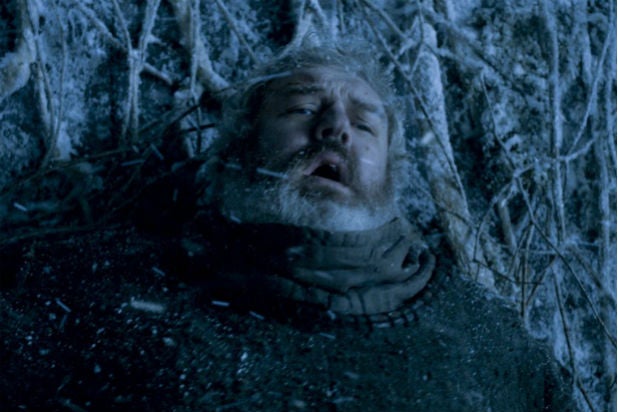 Hodor’s death is one of the most memorable moments from the eight-season run of “Game of Thrones.” But the way David Benioff and Dan Weiss’ HBO epic portrayed the death of Kristian Nairn’s mentally disabled giant, who was fiercely loyal to Bran (Isaac Hempstead Wright) and the rest of the Stark family, is different from how George R.R. Martin says the infamous “hold the door” scene will go down in one of his “A Song of Ice and Fire” series’ two remaining books, “The Winds of Winter” or “A Dream of Spring.”

“I thought they executed it very well, but there are going to be differences in the book,” Martin said in James Hibberd’s new book, “Fire Cannot Kill a Dragon,” according to EW. “They did it very physical — ‘hold the door’ with Hodor’s strength. In the book, Hodor has stolen one of the old swords from the crypt. Bran has been warging into Hodor and practicing with his body, because Bran had been trained in swordplay. So telling Hodor to ‘hold the door’ is more like ‘hold this pass’ — defend it when enemies are coming — and Hodor is fighting and killing them. A little different, but same idea.”

As “Game of Thrones” fans will remember all too well, Hodor died in the Season 6 episode “The Door” while literally holding a door shut with his body to block the attack of a horde of wights, as Bran and Meera Reed (Ellie Kendrick) escape the Three-Eyed Raven’s tree. He is killed by the wights tearing him apart, while he repeats his own name until one of Bran’s visions reveals Hodor is actually saying “hold the door,” a phrase that was imprinted on him as a child and became the only thing he could say, due to this very moment and Bran’s role in it.

“Game of Thrones” co-producer said that for the HBO series, “holding the door is visually better, especially because we have so much fighting.”

So we’ll see how that moment actually plays out in either Martin’s “The Winds of Winter” or “A Dream of Spring,” whenever he gets around to finishing them, that is.