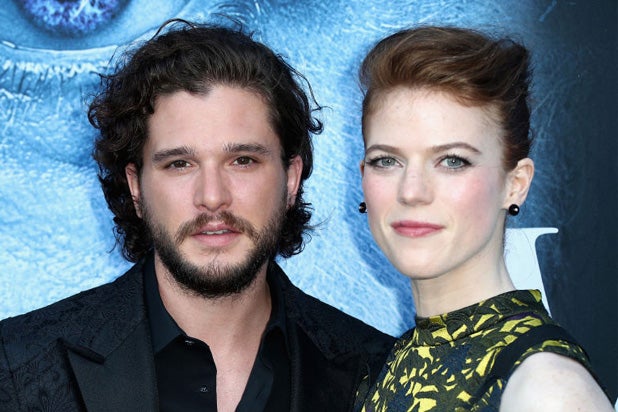 But what about Daenerys?

“Game of Thrones” fans reacted swiftly to reports on Tuesday that former co-stars Kit Harington and Rose Leslie had announced their engagement.

The couple had met on the set of the hit HBO series, where Harington’s no-longer-a-bastard Jon Snow had romanced Leslie’s wildling character, Ygritte — until she met her end in typically dramatic fashion toward the end of Season 4.

“Here’s hoping that Kit Harington proposed to Rose Leslie in a sexy cave,” tweeted one fan, referencing the location of a steamy sex scene between Jon and Ygritte.

Others expressed dismay that one of Hollywood’s hottest stars has taken himself off the market. “Kit Harington is engaged … but not to me,” wrote one.

Also Read: 'Game of Thrones' Gets a Physics Lesson From Neil deGrasse Tyson

And at least one offered some advice to the couple. “Do NOT, I repeat, DO NOT invite George RR Martin to your wedding,” tweeted one in reference to “Game of Thrones” author’s penchant for creating decidedly lethal wedding receptions.

Here’s a sampling of other responses to the news.

Do NOT, I repeat, DO NOT invite George RR Martin to your wedding. ☺ #GameOfThrones https://t.co/lvRy1SPYbo

Here’s Hoping That Kit Harington Proposed to Rose Leslie in a Sexy Cave https://t.co/8S6cL2ncd2 via @vulture