(Warning: This post contains spoilers for the Season 8 premiere of “Game of Thrones,” titled “Winterfell”)

“Game of Thrones” fans have had 24 hours to dissect the new credits sequence that opened the eighth and final season premiere Sunday night. But we’re willing to bet all the money in the Iron Bank of Braavos that even eagle-eyed viewers didn’t spot every significant detail in the 1-minute 58-second clip, which you can view above.

And that’s because on Monday, TheWrap spoke with the team at Elastic, the production studio that has been designing the opening credits for David Benioff and Dan “D.B.” Weiss’ HBO fantasy epic for the last nine years, and they told us what to you may have missed at the start of the Season 8 premiere, “Winterfell.”

“There’s one thing that, actually even my wife and I we were watching the premiere and she missed it the first two times that we watched it,” Kirk Shintani, Elastic’s head of CG, told TheWrap. “But I was telling her that in the crypt, you’ll see Lyanna Stark’s statue in the very beginning. And it goes really fast, so if you’re not paying attention it’s pretty easy to miss. But it’s those kind of little things, little those kind of details that Dan and David are really focused on. And they wanted to make sure that things like that are in there for the fans and they can recognize that stuff and that stuff is kind of a reward for paying attention and following along.”

See below for a screenshot of that blink-and-you’ll-miss-it Lyanna moment. 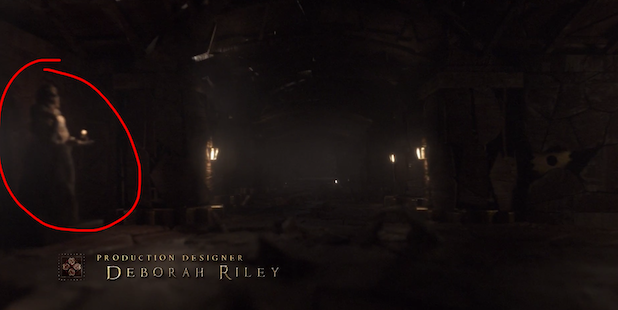 Elastic didn’t just design new opening credits for the Season 8 premiere, but each one of the show’s final six episodes. And Shintani told us that one of the team’s biggest focuses for the season was “persistence.” “So the idea that everything that’s there, is there — if that makes sense.”

Hold on, we asked Kirk to explain that one a little more.

“So basically, we’re not doing magic or anything like that by like swapping whole things out episode to episode,” Shintani said. “So the idea that all the little bits and pieces that we wanted to put in, they’re always kind of there, whether or not they are noticeable or if you actually pay attention to them. That’s kind of something that we wanted to make sure of, that it felt like it’s a set piece that’s sitting there and you happen to catch something in Episode 1 at a certain point and time. And as the episodes progress, you know, as the set piece changes, the things that you notice happen later, you might find little hints of those same things in the previous episodes.”

In summation: Shintani says “everything that is going to be there for all six episodes in little bits and pieces,” those elements will have been in the Season 8 opening credits from the premiere episode, just maybe not in plain sight.

Elastic’s creative director Angus Wall told TheWrap the team had been asking showrunners Weiss and Benioff to let them retool the “GoT” opening credits sequence for years and were “psyched that they finally said yes” ahead of Season 8.

“I think there were things in the initial design for this many, many years ago that we did not do in the first seven seasons that we finally implemented for Season 8, which is more of a living map that’s telling a more detailed story of what’s happening in the world,” Wall said. “Instead of being more of a geography lesson, this is telling us where people and armies and things are moving. So there were certain design systems that we talked about early on for the first seven that we did then utilize in Season 8.”

And boy, did they go to town with those new elements in the opening to “Winterfell,” from dwindling the map down to just The Wall, Winterfell, King’s Landing and the Last Hearth (shown for the first time), to finally going inside locations, to the tile path representing the White Walkers’ march south, to the change of the murals on the astrolabe to depict the fall of The Wall, the Red Wedding, and the birth of Daenerys’ dragons.

“That was a conversation with Dan, David, [producer Greg Spence] and [executive producer Carolyn Strauss] about what scenes should be depicted,” Wall said. “I think adding these new scenes to the astrolabe is meant to be a reward to the viewers, that they have witnessed events that have turned into a lore that have been realized in the relief sculptures on the astrolabe bands, much like the existing depictions on the astrolabe bands on Seasons 1-7 that we don’t experience on the show. So in a way, it’s kind of a new chapter where we’re acknowledging that in the first seven seasons, we witnessed massive historical events.”

All this retooling meant more man hours went into creating the opening credits for each of the final season’s episodes than Elastic has devoted to the previous year’s sequences.

“I will say that, as a whole for all six episodes, it took longer to put together — since everything was built from scratch — than probably the first and second season combined,” Shintani said. “It was much more work for us to do for this season than the first two seasons combined.”

As for what the Elastic guys can say about the series finale’s credits, it’s not much, but there is this from Shintani:

“Specifically for the final episode, I think you’re probably going to have to watch to see. I don’t want to get in too much trouble with HBO and Dan and David, but it was a lot of fun for us to finally be able to put some of the things that we’ve been itching to put in there for the last seven seasons. We finally got a chance to do it. So for us it was a nice way to cap a nine year run. And everybody got pretty sentimental as we were finishing because it’s kind of been a thing for almost a decade for us. It meant a lot, not just professionally but personally.”