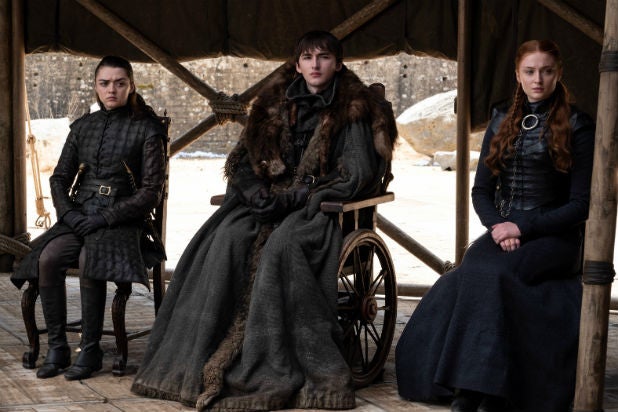 (Warning: This post contains spoilers for the series finale of “Game of Thrones,” titled “The Iron Throne.”)

“Game of Thrones” aired its series finale Sunday night, bringing to an end David Benioff and D.B. Weiss’ small-screen adaptation of George R.R. Martin’s “A Song of Ice and Fire” book series. And not everyone liked how the HBO series ended, with some fans not even waiting until the episode had aired to sign a Change.org petition asking the pay-TV channel to remake the entire final season with “competent writers.”

When TheWrap interviewed “Game of Thrones” stars Sophie Turner and Isaac Hempstead Wright about the fates of Sansa and Bran on Monday, in posts you can read here and here, we also asked them what their personal reaction has been to the fan’s response during these final episodes, and how they feel about the petition, in particular.

Here is what they said.

Sophie Turner: I don’t think I necessarily disagree with anyone. I think everyone has an idea of how they want this show to end in their heads — from Season 1, they’ve always had an idea. And it’s the way with every series finale or every final season, if it doesn’t go the way that they planned, they start panicking and they hate it and they don’t want to know about it because it’s not what they wanted. But the beauty of “Game of Thrones” is that it throws curveballs at you. However, I do think the petition and all of that is very disrespectful to the crew and the filmmakers who have slaved over this for 10 years and shot 11 months for this final season and did 50-something night shoots. It just feels like there is a level of disrespect there that I definitely don’t agree with.

Also Read: 'Game of Thrones': Sophie Turner on Why Sansa's Ending Was 'Better' Than the One You May Have Wanted

Isaac Hempstead Wright: Well, I mean, I think the petition is just kind of a weird, juvenile gesture. It’s so irrelevant to start petitioning to remake a series. But I’m trying to put that stuff out of my mind. It’s just nonsense, really. People have an absolute right to react how they like, that’s totally fair and we’ve said from the beginning, not everyone is gonna like the ending. Something as massive and as popular and that people are so invested in, there is no way you are going to please across the board. I think there are people who are now convinced they are experienced Hollywood screenwriters and are telling David and Dan, who are brilliant writers and producers, how terrible they are and just responding with a tweet. It’s like, I don’t think you can distill the complexities of eight seasons of “Game of Thrones” in one tweet slagging off the writers. I just think that’s a bit lazy. But, you know, everyone has a right to respond how they will. And I’m sorry, it’s a shame if some people feel like this has left a bit of a bitter taste in their mouth. But in my opinion, we’ve wrapped it up well. We haven’t done what everyone wants. I think the fact that people are so emotive and pissed off about things just proves that we’ve kind of done the right thing. We’ve elicited a reaction, a strong reaction from people by taking plot twists and plot directions that nobody wants.