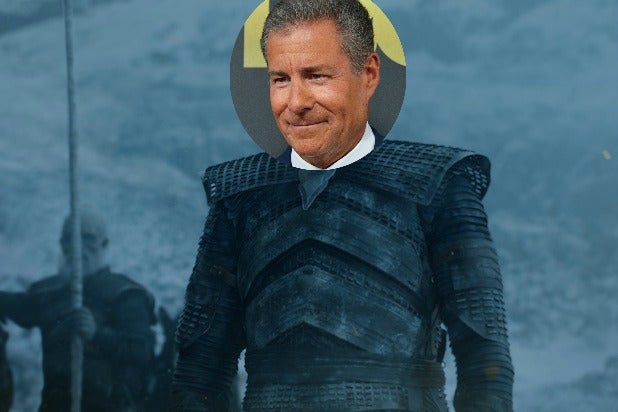 There are lots of lessons to be taken from “Game of Thrones”: tutorials in power, the importance of debt-paying, and the tricky business of alliances. But perhaps the greatest takeaway for HBO is one about patience — and Jon Snow’s got nothing on Richard Plepler.

The former HBO chairman and CEO has been enjoying a victory lap over the huge show he famously greenlit despite having a lackluster pilot. We asked Plepler’s understudy, Casey Bloys, and his replacement, Bob Greenblatt, about the lessons they learned from “Mr. Prestige” sticking with — and investing a lot of money to reshoot — a pilot that even series co-star Nikolaj Coster-Waldau recently called “unbelievably bad.”

“The pilot process is important and instructive,” Bloys told us. “Everybody goes into a pilot thinking the show is going to be one thing, and you sometimes discover, ‘Oh, what we thought it was gonna be — what if we did it more like this?’ Or a certain actor wasn’t exactly what you thought, or you could use them a different way.”

“It’s a very, very helpful tool,” he tacked on, “a valuable time to get a show right.”

HBO has already applied that lesson since: The premium-cable channel reshot half of the “Silicon Valley” pilot as well, Bloys remembered during our conversation. Heading into Season 6 — and getting “Barry” out of “Silicon Valley” co-creator Alec Berg — we’d say that one is working out pretty nicely, too.

Before any of those costly “Thrones” reshoots, however, Plepler and his team had to decide if an adaptation of the George R.R. Martin book series even fit their brand.

“When the show launched, I think there was some question, you know, ‘Is a fantasy series something that feels like HBO?'” Bloys recalled. “And I think that’s the important lesson here, is if something is of high quality… [don’t] get too hung up on, ‘Does this genre feel like HBO?’ That’s where you can take creative chances.”

But what about Bob? Not only is he basically taking the torch from Plepler, the former NBC boss was playing the “Game of Thrones” game well before any HBO (or NBC, for that matter) affiliation.

“For the record, when I was at Showtime, I also bought ‘Game of Thrones,'” Greenblatt said. “I’m so thrilled to have heard the pitch. Of course, I was never gonna get it from HBO because HBO was the preferred choice at that point. But I never would have foreseen what it turned into — and I wanted it,” Greenblatt continued. “I thought, ‘Wow, this is a completely new world. We’ve never done anything like this.'”

“They never are born completely conceived. In a million years, I have not seen that,” Greenblatt said of pitches. “If you get a pilot 60 percent of the way there … that’s a success. And then the series builds from there.”

“‘Game of Thrones’ is a really great lesson for everybody,” Greenblatt summed up. “Just buying a series because great auspices come into the room and then going into production is not always the way to create one of the greatest shows ever made for television.”