Just when New Yorkers thought spring had finally sprung, winter came back to town Wednesday night, along with the world premiere of the eighth and final season of “Game of Thrones.”

TheWrap was in attendance at Radio City Music Hall when HBO welcomed its “GoT” stars, other celebrities, fans, TV execs and members of the media “to the beginning of the end” — as a voiceover reminded us before the screening — of David Benioff and D.B. Weiss’ epic fantasy series.

And though we can’t tell you what happened on screen (at least not until the Season 8 premiere airs on April 14), we can offer up some details about what we saw and heard before returning to Westeros. 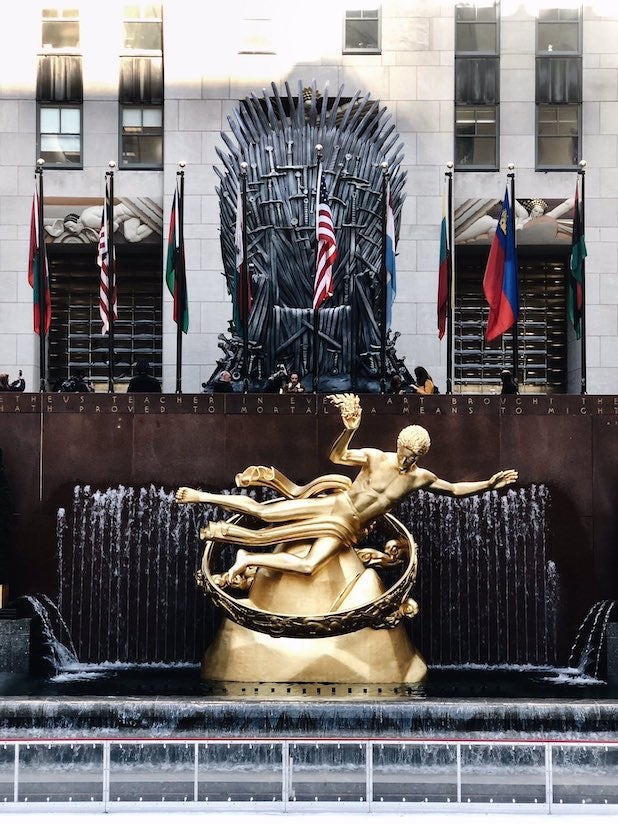 1. HBO laid claim to Rockefeller Center with a giant Iron Throne
No, like, a GIANT Iron Throne (see above). If everyone fighting for control of the Seven Kingdoms could see this mega-chair, they might consider conquering Midtown Manhattan instead.

2. “Game of Thrones” stars were in good company
Emilia Clarke, Sophie Turner, Maisie Williams, Peter Dinklage, Nikolaj Coster-Waldau, Sean Bean, Jason Momoa, Natalie Dormer and even George R.R. Martin himself. Yes, almost all of the “Game of Thrones” fam was front and center tonight — Lena Headey was sick and Kit Harington ducked out early (we’ll come back to that one). But HBO also invited big names like John Oliver, Rosie O’Donnell and Joe Jonas — just to name a few. 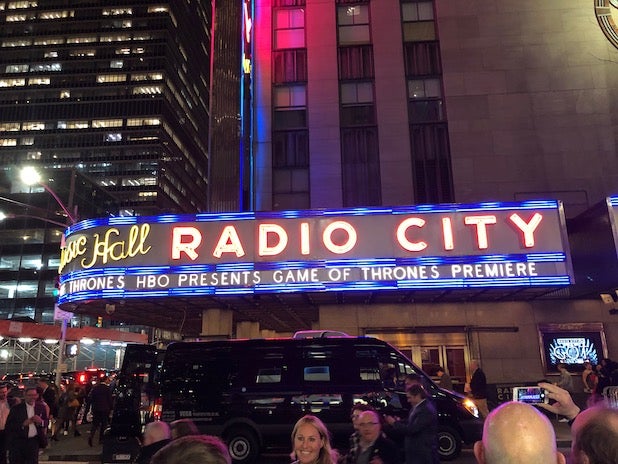 3. The line was a pain — if you were early
Apparently it doesn’t always pay to be punctual. Those who arrived hours in advance to pick up their tickets for the show had to maneuver around hordes of fans in Rockefeller Center first and then wait in a long line to get their coveted passes (more on those in a second). Attendees who arrived closer to showtime got in much faster. 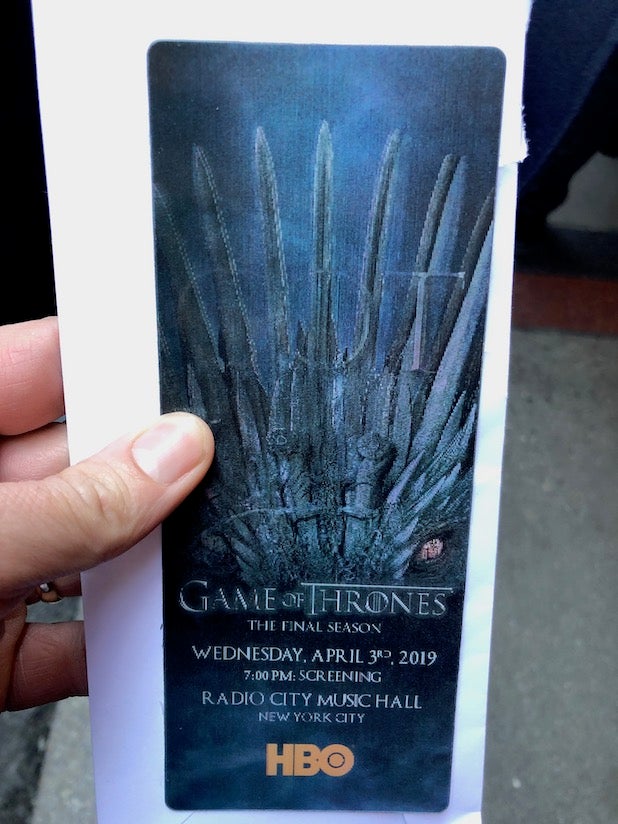 4. The fanciest tickets this side of Essos
If you were lucky enough to get one of the assigned seats inside Radio City Music Hall tonight, it came with a hologram ticket featuring the Iron Throne. Oh, and everyone got some free popcorn and water, too.

5. Lots of love for the Starks, not so much for the Lannisters
Reactions to the pre-screening packages showcasing the Great Houses of Westeros proved there was a lot of loyalty to the Starks in the house via some very loud applause. The same could not be said for the Lannisters’ reel. However, the House Stark footage did run first, so timing could have been the reason behind louder cheering for the wolves than the lions, not just fans’ disdain for Cersei.

6. A killer spoiler alert
Maisie Williams and Sophie Turner got into character as Arya and Sansa to remind everyone that photos were strictly forbidden and episode details must be kept under wraps: “Remember what happened to the last person that f–ked with us.” (R.I.P. Littlefinger.) 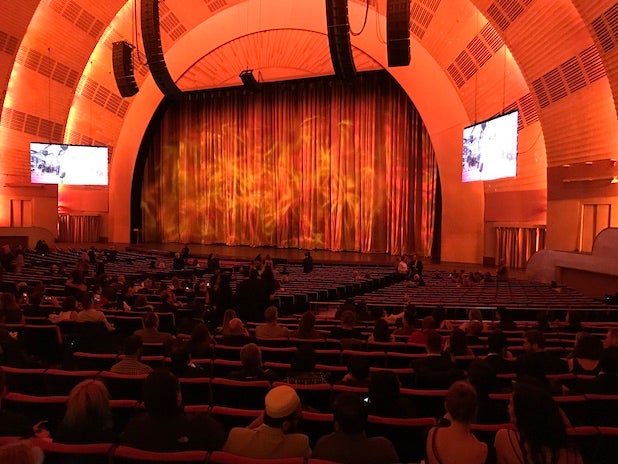 7. Richard Plepler gets thanked — a lot
The former HBO chairman and CEO, who announced his exit from the company in February, might have actually been name-dropped more than anyone on the show itself. Plepler received many a shout-out from HBO programming chief Casey Bloys and the showrunners during their respective introductions before the episode.

8. The show didn’t get on the road right away
The premiere screening was scheduled to begin at 7 p.m. ET, but over 50 minutes of speeches and retrospective footage pushed that start time back until almost 8 o’clock.

Also Read: Does New 'Game of Thrones' Teaser Reveal That Jon Snow Dies at the Battle of Winterfell? (Video) 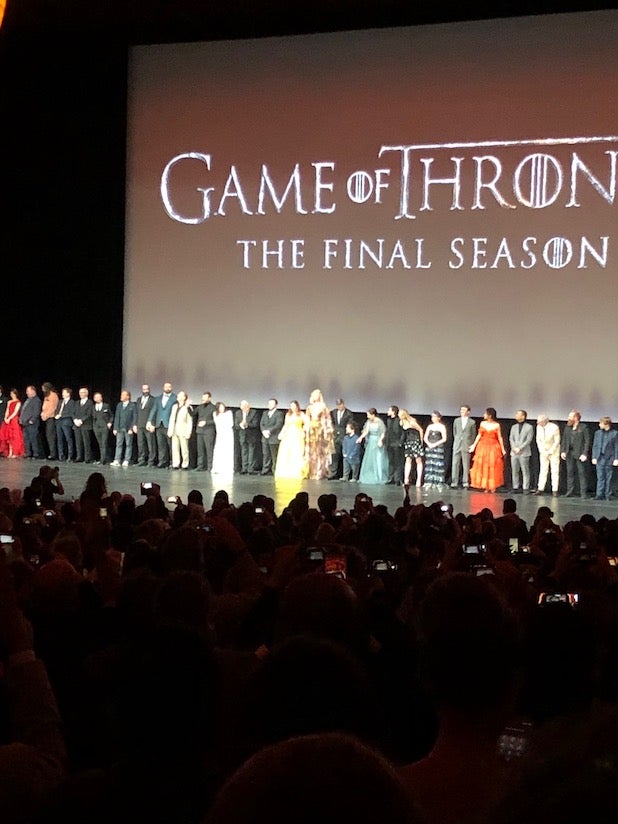 9. Kit bailed for “SNL”
While the cast took the stage before the episode started to welcome everyone, Harington had to exit just after that bit to go back to work across the street. Blame Jon Snow’s “Saturday Night Live” hosting duties for taking him away.

10. Sorry, no title
The name of the Season 8 premiere was not revealed before or after the episode screened. But had it been, we’d probably be killed by Arya if we told you what it’s called.