(Disclaimer: TheWrap has not included any spoilers for the “Game of Thrones” Season 8 premiere in this post and will hold all episodic coverage until after the show airs in its scheduled 9 p.m. ET slot on HBO)

The eighth and final season premiere of “Game of Thrones” was available on DirecTV Now four hours ahead of its scheduled 9 p.m. ET airing Sunday on HBO. And fans on social media were, understandably, unhappy about winter coming earlier than they expected.

Subscribers to the service, which is owned by AT&T — the company that acquired HBO’s parent, WarnerMedia, in a merger last year — started tweeting about the “GoT” Season 8 premiere’s surprise drop around 5 p.m. ET.

DirecTV Now customers were able to view the entirety of the first episode which has a runtime of approximately an hour and five minutes, including previews. The premiere’s title was not revealed via the service, which labeled the installment “E1.”

“Apparently our system was as excited as we are for ‘Game of Thrones’ tonight and gave a few DIRECTV Now customers early access to the episode by mistake,” a spokesperson for AT&T said in a statement to TheWrap Sunday. “When we became aware of the error, we immediately fixed it and we look forward to tuning in this evening.”

When reached by TheWrap for comment, HBO directed us to AT&T’s statement regarding the early release.

As of 6:52 p.m. ET on Sunday, both Episode 801 and Episode 802 were listed on DirecTV Now as “E1” and “E2,” but neither was accessible for customers to watch at that time. TheWrap is told that at no point was the second episode actually available for viewing. 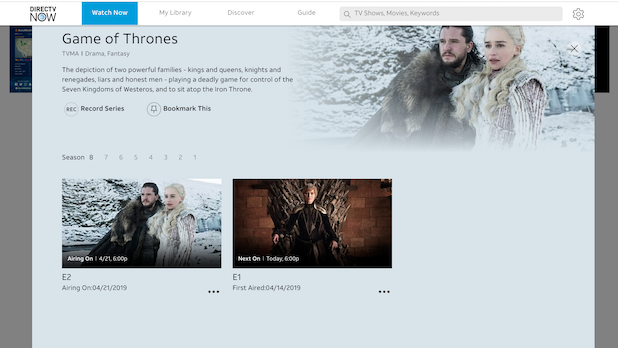 See fan tweets regarding the premiere’s early release below.

It absolutely is streaming early on DirecTV Now. pic.twitter.com/ETxPqXvHXp

So this is season 8. I think @directvnow screwed up. But I get to watch @GameOfThrones 3 hours early. pic.twitter.com/j13hJL1its

So PSA. Tonight's #GamesOfThrones premiere dropped hours and hours early on Direct TV so BE CAREFUL ONLINE FOR TWITTER IS DARK AND FULL OF SPOILERS.