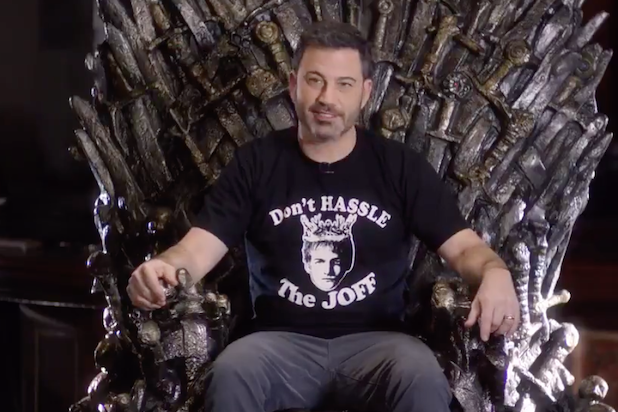 On Wednesday, HBO dropped a new video teasing the upcoming eighth and final season of the fantasy epic, which featured Jimmy Kimmel, Kristin Chenoweth, Aaron Rodgers and T-Pain — all superfans of the series — sitting on the Iron Throne, playing with props from the show.

Look, we’re not saying we would have preferred to finally get a trailer — except maybe we are.

In the one-minute clip, these four celebs reveal they’ll be binge-watching Season 1 all over again “For the Throne,” as part of a marketing campaign coordinated between Twitter and HBO. Apparently these guys were picked for this gig “because of their incredible tweets about the show.”

A Twitter spokesperson tells TheWrap more videos featuring these guys are to come throughout the week, including “T-Pain remixing the theme song, Kristin Chenoweth talking about ‘Game of Thrones’ the musical, Jimmy Kimmel revealing when he has to steal the remote from his wife and Aaron Rodgers choosing his ‘Game of Thrones’ fantasy lineup.”

No word on a trailer yet.

Now their watch begins.
Join the conversation on @Twitter with @JimmyKimmel, @KChenoweth, @TPain, and @AaronRodgers12 as they Binge #ForTheThrone and start Season 1 this week. pic.twitter.com/VV0lPwyE17