(This post contains spoilers for the third episode of season 8 of “Game of Thrones,” “The Long Night”)

Holy cow, that sure was something. A week after one of the best episodes of “Game of Thrones” ever, in which everybody sat around drinking and/or getting laid because they knew they were probably about to get brutally destroyed, we get one of the most epic episodes ever — 82 minutes of total madness.

We lost a lot of friends along the way — RIP Ser Jorah (Iain Glen) and Theon (Alfie Allen) — and the whole thing culminated when Arya managed to pull off one of the biggest surprises in the show’s history by taking out the Night King. But seriously, so many people are dead now, and there are a lot of folks whose fates are unclear.

Among the casualties were pretty much the entire army of Dothraki, who were the first line of defense and who were dispatched very quickly at the beginning of the battle when they charged into the darkness. With the Dothraki were Jorah, who managed to be among the few who survived that assault, and the direwolf Ghost.

While Jorah and a handful of the Dothraki managed to get back to the good guys’ battle line, we never saw Ghost again for the rest of the episode. Fans have been frustrated by Ghost’s general absence from major events for the past couple of seasons, so it was exciting to see him on the front line when the episode began.

So the thought that Ghost might have been killed offscreen is immensely distressing for all of us direwolf fans, especially after most of the other Stark direwolves have been brutally killed over the years. But unless we actually watch somebody die, it’s usually good to hold off on assuming they didn’t survive.

And in this case, it looks very much like Ghost did, in fact, survive this episode, because in the teaser for next week’s episode we get what appears to be a glimpse of him alive and well. In this very brief, split-second shot. 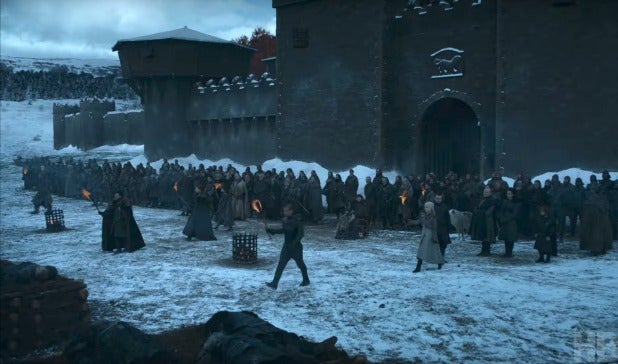 Okay, yeah, I get it, trying to find Ghost in this shot is like reading a Where’s Waldo book. So let’s take a closer look. 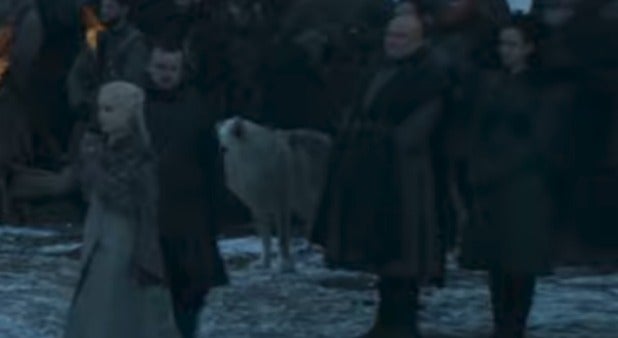 Yep, there he is. He’s still alive and a very good boy. I hope, David Benioff and D.B. Weiss, that you’re going to give him a chance to rip out some Lannister and Golden Company throats out before this whole thing comes to an end in three weeks.