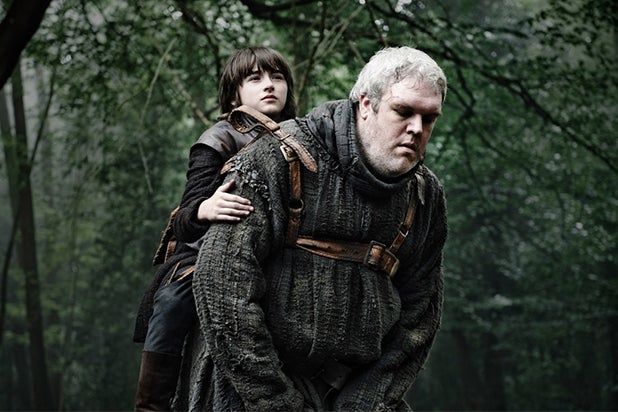 Hiatus is coming for “Game of Thrones” stars Kristain Nairn and Isaac Hempstead-Wright. In a recent interview Nairn revealed their characters weren’t scheduled to appear on Season 5 of HBO’s hit fantasy series.

“We have a season off and we have a year’s hiatus, solely because I imagine our storyline is up to the end of the books,” the Northern Irish actor told Yahoo! News.

Nairn plays a half-giant named Hodor who is loyal to the oft-murdered Stark clan and has been protecting young Bran Stark (Hempstead-Wright) from various antagonizing forces for several seasons. Hodor’s role in the show is small, but his character — who only says “Hodor” — is a fan favorite.

Also read: Hodor from ‘Game of Thrones’ Proves to Be the Worst Family Feud Contestant Ever (Video)

In the interview Nairn said Hodor and Bran won’t be featured in the new season because their characters don’t appear in the two books it is based on, George R. R. Martin‘s “A Feast for Crows” and “A Dance with Dragons,” which are the fourth and fifth books in the author’s award-winning fantasy series “A Song of Ice and Fire.”

Nairn, who is also a touring DJ, plans to use this new found free time to focus on his music career. “So, I get my year off now to do [my tour] Rave of Thrones and gallivant all over the world,” he said. Nairn is now on tour through the end of the year with dates in Australia, the U.K., Germany, Istanbul and several U.S. stops, including two New York Comic Con dates in October.  (Check out Nairn’s “Summer Night Mix 1” from his SoundCloud page below).

The next season of “Game of Thrones” is expected to kick off in April 2015.