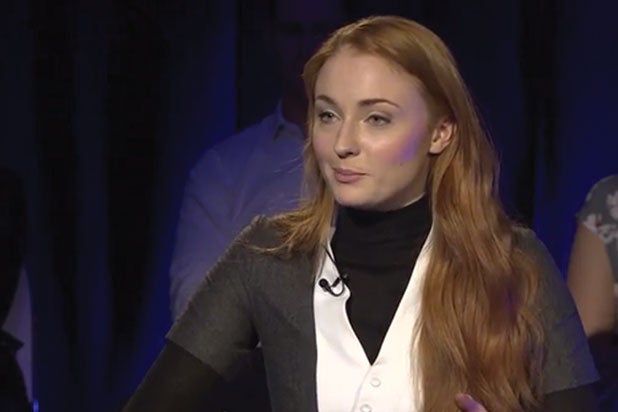 “Game of Thrones” star Sophie Turner doesn’t really want her character, Sansa Stark, to survive, and has her own idea of whom she would like to see take the throne.

“I don’t want to survive,” Turner said during an interview with WSJ Cafe. “I want Littlefinger to end up on the throne … If you’re on ‘Game of Thrones’ and you don’t have a cool death scene, then what’s the point?”

The actress also teased the upcoming sixth season of the HBO series, premiering on April 24.

“The past five seasons have been everyone spreading out and going their separate ways and it’s very sparse,” she said. “Season 6 feels like everything is coming together and storylines intertwining and people are forming alliances with other characters and everyone is coming towards the same goal.”

And while she wants her character, Sansa, to die at some point in the show, Turner says the sixth season has Sansa “taking charge and being a leader … She’s really going to thrive this season.”

The last moments of season 5 had Sansa jumping off the walls of Castle Black with Theon Greyjoy (Alfie Allen), and no one really knew whether to expect she survived or not. However, in the WSJ interview, Turner does “confirm she landed in a pile of snow.”

Also Read: Ian McShane Doesn't Care If He Spoiled 'Game of Thrones': 'It's Only Tits and Dragons'

Another talking point in the interview was that Turner believes the show, contrary to popular belief, is actually a feminist series.

“I think that the depiction of women is a nice depiction of women,” she added. “Back then, women didn’t have half the power they have in the show. This isn’t a popular opinion but it’s definitely a feminist show because as I say, back then women didn’t have the power to control kingdoms and they weren’t becoming the strongest characters in life. In this show, some of the strongest characters are the female characters. But we have to cater to the times they are in so there are these social boundaries put upon them and they break out of them in the show.”