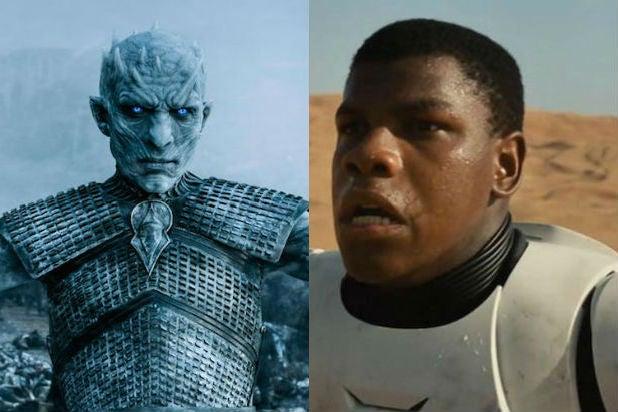 The results are in and “Star Wars: The Force Awakens” and “Game of Thrones” are the most talked-about movie and TV show on Facebook for 2015.

The highly anticipated J.J. Abrams film beat out a number of box office success stories despite the fact it won’t open in theaters until Dec. 18. “Furious 7,” “Jurassic World,” and “Avengers: Age of Ultron” also made the list, but proved no match for the return to the galaxy far, far away.

On the TV side, “Game of Thrones” beat out fellow cable powerhouse “The Walking Dead” and the Netflix original series “Orange Is the New Black.” Jon Stewart‘s departure no doubt helped push “The Daily Show” up the list, while Stewart’s former protege, John Oliver, came in at No. 10 with his HBO series “Last Week Tonight.”

Also Read: How to Watch the 'Star Wars' Trilogies Before 'The Force Awakens' Opens

All Facebook year-in-review lists (except New Sticker Packs and Places) were measured by how frequently a topic was mentioned in Facebook posts made between Jan. 1 and Dec. 1. To put these lists together, Facebook posts were analyzed in an aggregated, anonymized way, and then ranked to create a snapshot of the year on Facebook.

Read the full top 10 movie and TV lists below