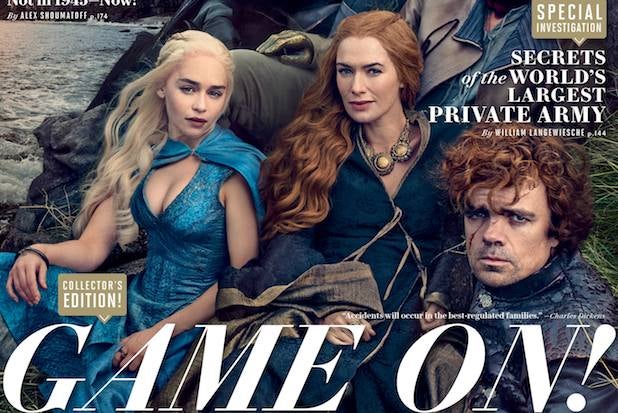 George R.R. Martin has reason to be alarmed: “Game of Thrones” debuts its fourth season on HBO next month, while the author has only released five out of his seven books.

“I can give them the broad strokes of what I intend to write, but the details aren’t there yet,” Martin told Vanity Fair for its April issue, featuring several cast members on the cover (below). “I’m hopeful that I can not let them catch up with me.”

“Last year we went out to Santa Fe for a week to sit down with him and just talk through where things are going, because we don’t know if we are going to catch up and where exactly that would be,” Benioff explains. “If you know the ending, then you can lay the groundwork for it. And so we want to know how everything ends. We want to be able to set things up. So we just sat down with him and literally went through every character.”

Also read: Joffrey on ‘Game of Thrones’ to Quit Acting, Be a Humanitarian

The show, a hit with audiences and critics, is showing no signs of slowing down, as characters keep coming and going each season — no matter how much the fans are attached to them. Co-creator D.B. Weiss doesn’t plan on milking it, however, and said the series would most likely wrap up by Season 7 or 8.

“It doesn’t just keep on going because it can,” Weiss said. “I think the desire to milk more out of it is what would eventually kill it, if we gave in to that.”

The longer the show does continue, however, the more challenges the production will be faced with, since the cast consists of a number of child stars who are growing up in front of views, while their characters stay the same age.

“This is a serious concern,” Martin said. “Maisie [Williams] was the same age as Arya when it started, but now Maisie is a young woman and Arya is still 11. Time is passing very slowly in the books and very fast in real life.”

A release date for Martin’s next “Song of Ice and Fire” book, “The Winds of Winter,” has not yet been announced. The show returns on April 6.