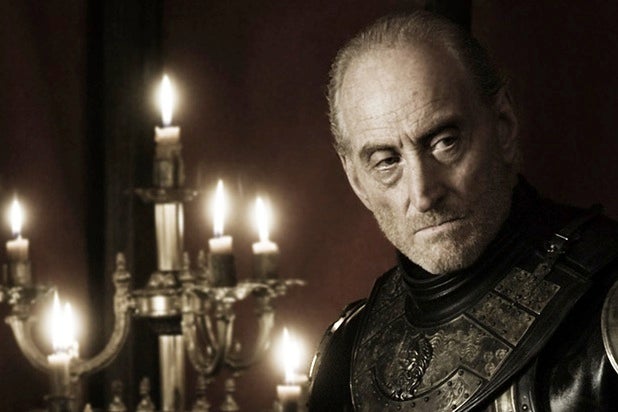 (Spoiler alert: Don’t read this if you haven’t seen Sunday’s season finale of “Game of Thrones.”)

Season 4 of HBO’s “Game of Thrones” has been a season marked by brutality, betrayal, treachery and some of the most delicious deaths in the dark and bloody history of a show that has pretty much defined the art of killing off its characters for maximum impact.

So it figured that the season would end in gore, glory and, well, gory glory. And Peter Dinklage‘s Tyrion Lannister figured to be a major part of the finale, since his death sentence for killing King Joffrey (as you no doubt recall, he didn’t do it) meant the Imp was on a collision course with either a beheading or an escape.

Also read: ‘Game of Thrones': The Love of Tyrion Lannister’s Life Talks Dramatic Finale, Favorite Death and All That Nudity

But it’s hard to imagine an escape any darker, bloodier or more delicious than the one engineered by Tyrion’s brother Jaime (Nikolaj Coster-Waldau) and Varys (Conleth Hill) and carried out by Tyrion on the spectacular Sunday night finale.

He didn’t just slip away into the night, though that option was open to him. No, the eternally put-upon Tyrion, hated by his father and unjustly condemned by his sister, took it upon himself to sneak back to his father’s chamber rather than heading out of King’s Landing.

He strangled his one true love, Shae (Sibel Kekilli), when he found her in his father’s bed, then dispatched his father, the eternally evil and consummately power-hungry Tywin Lannister (Charles Dance), with a crossbow while dear old dad sat on the toilet.

On Father’s Day, no less.

(OK, so it wasn’t Father’s Day in Westeros. But it was where I was watching the show.)

The killing of Shae was less cold-blooded than it is in George R. R. Martin’s books, where she didn’t go after Tyrion with a knife. And the fratricide perhaps wisely dispensed with the author’s depiction of Tywin evacuating his bowels at the moment of death.

The sequence also eliminated an entire conversation about Tyrion’s past that was crucial to his decision in the books, though it’s unlikely that TV viewers will think he didn’t have reason enough without it.

This was the moment Tyrion and Dinklage had been building up to during what has been a strong season for the character and the actor, with a parting shot to remember as he finished off his father:

“I am your son,” he said calmly and commandingly, as his father sputtered otherwise. “I have always been your son.”

See video: Hodor from ‘Game of Thrones’ Proves to Be the Worst Family Feud Contestant Ever (Video)

If Season 3 of “Game of Thrones” was defined by the Red Wedding, Season 4 will be remembered for a number of deaths spread out across the season: Joffrey’s long-awaited demise at his wedding; Oberyn Martell’s brutal death at the conclusion of his fight with the Mountain; wildling Ygritte dying in Jon Snow’s arms during the battle in the North; and, in the final episode, Sandor Clegane trying to get Arya Stark to kill him as he lay dying after a vicious battle with Brienne of Tarth.

This was a season that spread the wealth and the blood, and its final episode was a fitting wrap-up, a panoramic mini-epic that sometimes felt like the last hour of a “Lord of the Rings” movie as it moved from one storyline to another, giving everybody a moment or two to remember.

So Jon Snow had a faceoff with Mance Rayder. And Stannis Baratheon rode to the rescue beyond the Wall. And Bran Stark got attacked by skeleton monsters before finding a mysterious refuge and learning that while he’ll never walk again, he will fly. And Daenerys seemed to be losing control of her kingdom, and her dragons. And Cersei Lannister got to stand up to her father and have sex with her brother one more time. (No rape overtones this time.)

It makes sense that this is the episode that “Game of Thrones” submitted in many of the key Emmy categories – because in a season during which the show became HBO’s most-watched series ever, it summed up just how damn big the show has gotten in many different ways.

“Game of Thrones” showrunners David Benioff and D.B. Weiss skipped at least one huge moment from the books that they could have dropped into this season, but maybe there just wasn’t room.

So now Tyrion is in the cargo hold of a ship taking him across the Narrow Sea, and Arya is heading North in another ship, and Cersei will no doubt struggle mightily to fill the power vacuum left by her dead father in King’s Landing, and Dany will work to come up with a stance that works better over the long haul than righteous, dragon-enforced vengeance.

And winter is still coming, and George R. R. Martin needs to keep writing, and showrunners Benioff and Weiss need to figure out how to top this.