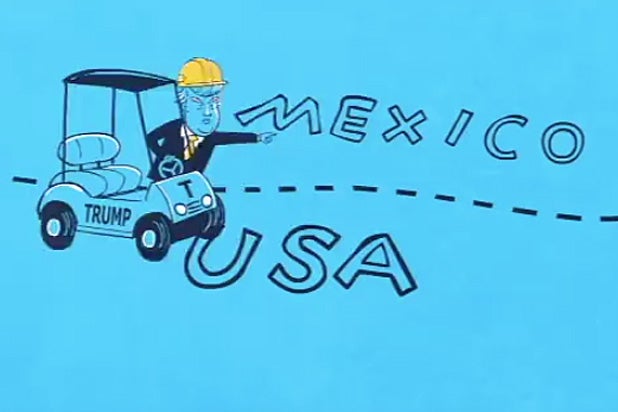 Gavin Newsom is no fan of Donald Trump, and the lieutenant governor of California made that abundantly clear on Monday night in a scathing video about the GOP frontrunner.

“Let me talk in a way that Donald J. Trump will understand: His immigration plan is a loser,” Newsom said in the video posted on Facebook.

“A big loser. I made this animated video to illustrate why its impossible to do the stuff he says he’s going to do. So putting aside the fact that it’s racist — it’s also ineffective and stupid …. make sense Donald?”

The jaunty and colorful cartoon depicts Trump — complete with a yellow construction hat — trying to build a wall along the Mexican border. “That won’t work because of rivers, mountains, tribal lands, farmland …” the voiceover explained.

As for the Republican candidate’s plans to deport Mexican immigrants? That will cost over $400 billion, according to a conservative think tank, American Action Forum.

“Trump’s plan would send our economy into a downturn worse than the great recession and cost our economy more that $1.6 trillion,” Newsom said.

“Trump’s plan will be a disaster,” he concluded, “And Donald, I will debate that any time, anywhere.”

Newsom, who plans to run for governor of California in 2018, posted a similar video criticizing Trump last September, ahead of a campaign visit to the Golden State.

Let me talk in a way that Donald J. Trump will understand: his immigration plan is a loser. A big loser. I made this…