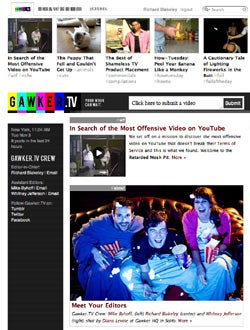 Gawker Media launched something called Gawker.TV on Tuesday, with Gawker’s longtime videographer Richard Blakeley at the helm, a pair of assistant editors, an “army” of interns and a nifty if familiar-sounding tagline: “Your work can wait.”

Gawker is calling it a “video-centric blog,” which is better than what I had initially feared: a repository of clips from the horned stable of Gawker-owned blogs (which have given the world such pop culture staples as the “McSteamy” sex tape).

So, just what can we expect from Gawker.TV?

“Amazingly cheesy ’80s and ’90s music videos, the best comedy sketches in existence, a daily wrap-up of what we’ll be watching every night, cute animal videos to make you smile, the best in fail videos, weekly how-to’s on a variety of subjects, wrap-ups of the week in video, the web shows that you should be watching, and always leaving you with a daily moment of WTF.”

Speaking of “McSteamy,” Gawker chief Nick Denton thinks it will be easier to sell advertisers on a video site, in some cases, than into, say, Fleshbot, where the “McSteamy” tape first appeared.