June is Gay Pride Month, and with most of the country under restrictions due to the ongoing coronavirus pandemic, most major Pride events are canceled. Thankfully, there’s plenty of entertaining and informative LGBTQ content to fill the entire month (and a few starting in May).

From questioning teens to talented queens, check out TheWrap’s list of Gay Pride Month programming below:

The “It Gets Better” Project is launching a three-day digital Pride event, bringing together a diverse slate of talent across genres, including fitness, lifestyle, fashion & beauty, gaming, music and drag performances. The Digital Pride event will stream from the organization’s YouTube, Facebook and Twitch on June 24th-26th from 2 p.m – 7:00 p.m. PT. The event will be hosted by “RuPaul’s Drag Race’s” Peppermint, and feature other alums including Crystal Methyd and Jujubee, as well as Rebecca Black and more.

Stonewall Day elevates awareness and support for the Stonewall legacy and the continuing fight for full LGBTQ equality. This year’s event also falls on the fifth anniversary of the historic Supreme Court ruling in Obergefell v. Hodges for marriage equality. 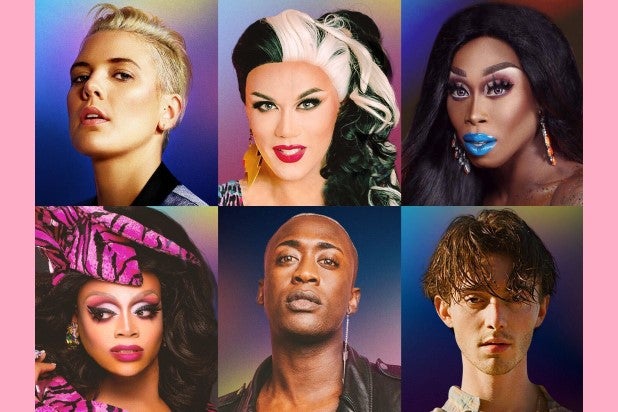 Amazon Prime Video will host a global, virtual Pride Festival, called Pride Inside, on June 27 and 28.

Check out all the festivities here. Amazon Studios and Prime Video will also be donating to the Black AIDS Institute and the National Queer and Trans Therapists of Color Network charities on behalf of “Pride Inside.”

“Legendary” (Premieres May 27 on HBO Max)

10 of the top queens from “RuPaul’s Drag Race” will return for a second (or third, in the case of Alexis Mateo and Jujubee) shot at the crown. This year’s “All-Stars” has a brand new twist: RuPaul will only select one winner from the challenge, who will go forth and lip-sync against a “mysterious lip-sync assassin” — former stand-out queens. If the All-Star prevails, she wins $10,000 and the power to send a competitor home. If the assassin wins, the bottom queen picked from a secret group vote goes packing and the prize money rolls over. This should make for some very interesting dynamics. Ricky Martin will serve as the guest judge in the premiere episode.

Hulu’s “Love, Simon” follow-up series is set in the world of the 2018 film. A young adult dramedy follows Victor (Michael Cimino), a new student at Creekwood High School on his own journey of self-discovery who reaches out to Simon to help him navigate the ups and downs of high school.

Host and actor Dyllón Burnside will explore LGBTQ+ Identity in the U.S. South in this one-hour special. The television special is a companion to the six-episode, short-form series will launch on PBS Voices, a new documentary-focused YouTube Channel by PBS Digital Studios, beginning Thursday, May 26 with Burnside’s own personal story.

In this searing documentary, Academy Award-nominated director David France (How To Survive A Plague) brings us a terrifying real-life thriller that shadows a group of brave activists risking their lives to confront the ongoing anti-LGBTQ persecution in the repressive and closed Russian republic of Chechnya. Read TheWrap’s review here.

Ahead of the Season 4 “Wynonna Earp” premiere this summer, catch-up on the fem/ship between Waverly Earp and Nicole Haught, better known as #WayHaught.

SYFY and USA have partnered with GLAAD during Pride Month to highlight LBGTQ+ visibility on-screen through these programs, virtual and social campaigns, public service announcements and more.

“Out” (Available now on Disney+)

This short film written and directed by Steven Clay Hunter follows a man who is about to move to the city with his boyfriend but is hesitant to come out to his parents that he’s gay. But in a magical twist brought about by a dog and a cat that soar out of a rainbow, the man briefly swaps bodies with his dog, and he rushes to hide evidence of his relationship before his parents discover his sexuality. The 10-minute short is available on Disney+ now.

From critically-acclaimed director/producer Daniel Karslake (the 2007 Oscar-shortlisted documentary, “For the Bible Tells Me So”) comes a powerful exploration of the intersection of religion, sexual orientation and gender identity in America. The documentary spotlights the heartfelt, personal journeys of four families of faith with LGBTQ children.

Siblings Luca and Ren who are in the process of transitioning to their true selves. As they work through the everyday ups and downs of life including school, puberty, dating, and friends, Ren also decides to compete in the local Lil Miss Westie pageant, receiving coaching and assistance from Luca who participated in the pageant before he transitioned. Little Miss Westie will premiere on WORLD Channel and worldchannel.org on Tuesday, June 16 at 8 p.m. ET/9 p.m. PT as part of the series America ReFramed — a series of independent documentaries.

“The Nance” (Premieres Friday, June 12 on Lincoln Center on Demand)

Tony Award-winner Nathan Lane stars in Douglas Carter Beane’s dark comedy as Chauncey Miles, who faces a changing world and his own self-loathing. The play paints the portrait of a homosexual man, living and working in the secretive and dangerous gay world of 1930s New York, whose outrageous antics on the burlesque stage stand in marked contrast to his offstage life. The play will stream at 8:00 p.m. ET on June 12.

From Julianne Hough to Da Brat to ”The Good Place“ star Jameela Jamil, a look at the notable people who now identify with the LGBTQ community