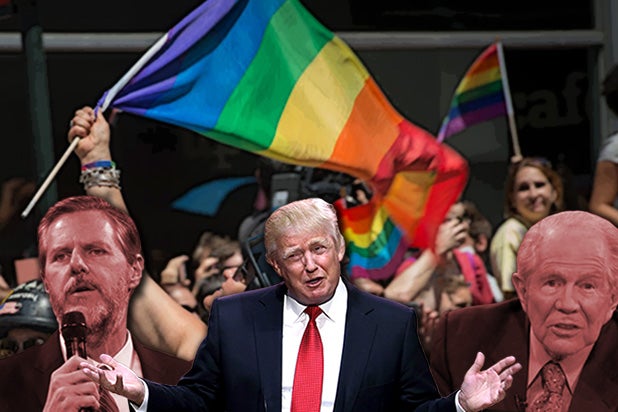 The president of the conservative LGBT group Log Cabin Republicans says Donald Trump is “the most pro-gay nominee this party has ever had” — but the group is holding off on an endorsement.

Gregory Angelo, president of the Log Cabin Republicans, noted Trump’s support of the gay community following the Orlando shooting last month, and Trump’s claim that he’s better on gay issues than his Democratic rival, Hillary Clinton. But he has serious problems with the company Trump keeps.

“While Donald Trump is the most pro-gay nominee this party has ever had, there are some genuine concerns that I have and concerns that our national board of directors have,” Angelo told TheWrap.

The group, which Angelo says has 30,000 members nationwide, started in the late 1970s in response to a failed California initiative that would have banned gays and lesbians from working in the state’s public schools. It came to prominence in 1992, the year it declined to endorse incumbent President George H. W. Bush after he failed to denounce anti-gay sentiment at the GOP convention. The Log Cabin Republicans have endorsed the Republican candidate every year since, except in 2004, when it objected to George W. Bush’s use of same-sex marriage as a wedge issue.

Angelo said the group is worried about Trump’s association with people known for anti-gay views, including Tony Perkins, the president of the Family Research Council, Pat Robertson, chairman of the Christian Broadcasting Network and Jerry Falwell Jr., president of Liberty University. Last month, the presumptive GOP nominee retweeted a picture of himself and Robert Jeffers, a known anti-gay Dallas pastor.

And on Tuesday the Republican National Committee moved to adopt a staunchly conservative platform Angelo said was more discriminatory than any Republican platform in recent memory.

“To say that I’m disappointed is an understatement,” Angelo said. “I’m incensed.”

But Trump’s gay supporters insists the GOP’s platform is nothing more than a formality that will have little bearing on party policies.

Log Cabin Republicans say there’s a lot about Trump they like. He’s appeared at the wedding of gay friends and has spoken out against North Carolina’s transgender bathroom law, inviting Caitlyn Jenner to use the toilet of her choice at Trump Tower (an invitation Jenner accepted wholeheartedly).

In 2012, Trump eliminated a Miss Universe rule requiring contestants be “naturally born female” after a Canadian competitor was told she would be disqualified because she was born male. And last year Trump told NBC’s “Meet the Press” he didn’t think private companies should be able to fire people for being gay.

While gay Americans tend to vote Democrat, there are plenty who lean right. A 2014 Gallup poll showed more than six in 10 LGBT Americans identify as Democrats or are Democratic-leaning independents, while 21 percent identified with or leaned towards the Republican Party.

But for more liberal LGBT voters, the idea of a President Trump is the stuff of nightmares.

“The truth is that Trump’s own record isn’t all that different from the GOP’s platform,” Jay Brown, communications director for the Human Rights Campaign, the country’s largest LGBT advocacy group, told TheWrap. “We’ve moved far beyond the point where attending a gay wedding is a sign of progress.”

HRC, which endorsed Clinton in January, says the GOP’s presumptive nominee is speaking from both sides of his mouth. In an ad earlier this year, the Log Cabin Republicans showed Trump flip-flopping on gay marriage several times to try to get him to take a hard stand in support of it.

A Huffington Post article earlier this month titled, “House Republicans Are Truly, Madly, Deeply Obsessed With Queer People,” argued that GOP members of congress have gone out of their way to slip anti-LGBT provisions into bills.

Critics say Trump is pandering to LGBT voters even as he joins more conservative Republicans in coming out against gay marriage and vowing to roll back all of President Obama’s executive orders — including those granting LGBT protections in the workplace.

“I look at Donald Trump’s history,” Moran said. “He was the first to let open homosexuals into his Mar-a-Lago club when no other clubs in West Palm Beach did, and he gave money to The AIDS Foundation, giving six-figure contributions. I’m looking at a pattern of him contributing and supporting the LGBT community.”

Log Cabin Republicans say they have yet to meet Trump, despite repeated invitations. The group will make its final decision on whether or not to endorse him in the fall.

“We have members of our national board who see Trump as good on LGBT issues but have problems with some of the other proclamations that Mr. Trump has made, whether it’s about women, the call for an absolute ban on Muslim immigration into the United States. These are the issues that give our board members pause.”

Trump’s campaign did not respond to TheWrap’s request for comment.