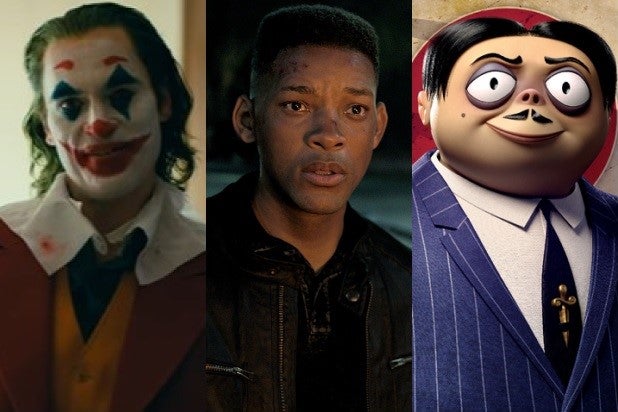 Through all the headlines and outrage, “Joker” has not loosened its grip on pop culture. With a $96 million opening weekend and strong audience reception, all signs point to a strong second weekend where it should stay No. 1 against two newcomers: Paramount/Skydance’s “Gemini Man” and UA/MGM’s “The Addams Family.”

Both new releases are projected for an opening in the low $20 million range, which “Joker” would be able to top even if it suffers a weekend-to-weekend drop of 65%. While such a drop is possible considering how the Warner Bros. release has outperformed many analysts’ expectations, a 65% drop would put it at around $33 million in its second weekend, which should be more than enough to hold on to the No. 1 spot.

Meanwhile, “Gemini Man” will serve as a test of how strong Will Smith’s drawing power is after the $1 billion hit “Aladdin” became the highest grossing film of his career. Directed by Ang Lee, “Gemini Man” was a major part of Paramount’s CinemaCon presentation last spring, as the studio sold the film as a collaboration between an acclaimed filmmaker and renowned actor with an original sci-fi story to boot.

But since its premiere, reviews haven’t been good. Critics praised Smith’s performance and the CGI work used to transform him into a younger version of himself, but panned the film’s story as confusing and poorly written. With a 46% score on Rotten Tomatoes, the film’s pre-release buzz is severely handicapped, and Paramount will likely have to rely on Smith’s name brand to draw in a strong overseas turnout. In China, Ang Lee will also be a possible draw for moviegoers, as he is regarded as one of the nation’s most recognized directors.

“Gemini Man” stars Smith as Henry Brogan, a retired assassin who is hunted down by a younger clone of himself sent by the government agency he used to work for. Mary Elizabeth Winstead, Clive Owen and Benedict Wong also star in the film, which Lee directed from a script by Billy Ray, Darren Lemke and “Game of Thrones” co-showrunner David Benioff. Jerry Bruckheimer is producing the film with Chinese studios Fosun and Alibaba co-financing with Paramount and Skydance.

Paramount will release the film on 3,600 screens, with 14 AMC locations screening it in 4K with a frame rate of 120 fps, a format that Lee explored in his last film, “Billy Lynn’s Long Halftime Walk.”

Analysts who spoke to TheWrap say that “Addams Family” has a somewhat better outlook, picking it as the film likely to open to No. 2 behind “Joker” with the chance to possibly over perform and gross closer to $30 million this weekend. The film will compete for family audiences with “Abominable,” which is entering its third weekend, but should bring in solid numbers through the end of the month thanks to the popularity of “The Addams Family” and its status as a seasonal offering for Halloween.