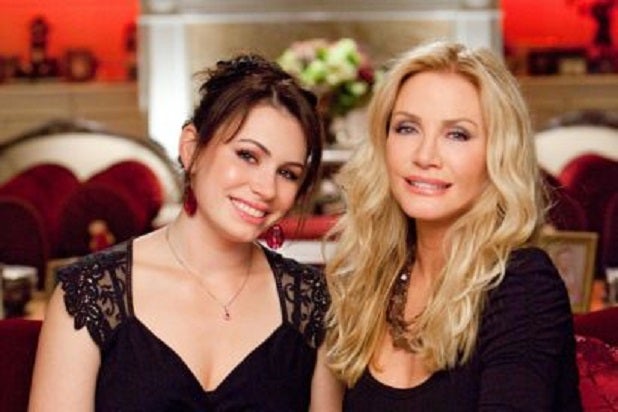 As improbable as it might at first seem, Gene Simmons is coming to UP.

The KISS frontman and his family will make their debut on the network, which is dedicated to uplifting viewers, in April with the U.S. premiere of the docuseries “Shannon & Sophie,” which has been acquired by UP.

The series, which originally aired on Canada’s W Network, focuses on the KISS bassist’s wife, actress/model Shannon Tweed-Simmons and daughter, Sophie Tweed-Simmons. and his son, Nick — who, like Shannon and Sophie, starred on the A&E offering “ Family Jewels” — also appear on the program, which premieres on April 16 at 9 p.m. with back-to-back episodes.

Also Read: Gene Simmons to ‘Fox & Friends': ‘You Get Paid an Enormous Amount’

The eight-episode series chronicles the famous clan as they navigate the everyday challenges of celebrity life and start a new chapter in their lives as Sophie decides it’s time to leave the family home and spread her wings as an adult — with Shannon flying protectively close behind.

As she turns 21, the sober, straitlaced Sophie juggles her duties at her children’s advocacy charity Sophie’s Place with her fledgling acting and music careers.

“Sophie resolves to blaze her own trail, starting with finding her own home. Shannon can’t help but follow Sophie, hoping to ensure that her daughter’s path not only leads in the right direction but is wide enough for two,” UP said of the program.

With Shannon in tow, Sophie embarks on a number of endeavors, including traveling to Nashville to sing with The Tenors and heading to New York to shoot a blog with Cosmo.

Even as Shannon grapples with the prospect of becoming an empty-nester, she also seeks to blaze her own trail in the series.

“While in an ongoing, constantly changing, hilarious battle of wills with her husband, Shannon takes on everything from dog adoption fairs to charity events. Together Shannon & Sophie share in each new experience with equal parts enthusiasm, and sarcastic commentary,” the network said of the series.

“We fell in love with the loving and funny mother-daughter relationship between Shannon and Sophie,” said Amy Winter, EVP and general manager, UP.  “In ‘Shannon & Sophie,’ we get a chance to see these two fun, offbeat personalities as they prepare for something all families face — a child leaving home and going out on their own.  In the end, the series shows that it doesn’t matter where you come from … whether Hollywood or the Heartland, your Mom will always be your biggest supporter, and still drive you a little crazy.”