(Reuters) U.S. Senator Edward Kennedy, a towering figure in the Democratic Party who took the helm of one of America’s most fabled political families after two older brothers were assassinated, has died, his family said. He was 77. 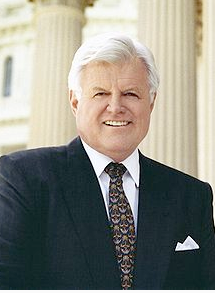 One of the most influential and longest-serving senators in U.S. history — a liberal standard-bearer who was also known as a consummate congressional dealmaker — Kennedy had been battling brain cancer, which was diagnosed in May 2008.

Kennedy’s death comes just a couple of weeks after the death of his sister, Eunice Shriver.

The full statement from the Kennedy family, from the senator’s website:

Edward M. Kennedy – the husband, father, grandfather, brother and uncle we loved so deeply – died late Tuesday night at home in Hyannis Port. We’ve lost the irreplaceable center of our family and joyous light in our lives, but the inspiration of his faith, optimism, and perseverance will live…

Read some of Kennedy’s Wikipedia entry:

Edward Moore "Ted" Kennedy (February 22, 1932 – August 25, 2009)[2][3] was the senior United States Senator from Massachusetts and a member of the Democratic Party. In office since November 1962, Kennedy was in his eighth full (and ninth overall) term in the Senate. At the time of his death, he was the second most senior member of the Senate, after Robert Byrd of West Virginia, and the third-longest-serving senator of all time. He was best known as one of the most outspoken and effective Senate proponents of liberal causes and bills.

For many years the most prominent living member of the Kennedy family, he was the youngest brother of President John F. Kennedy and Senator Robert F. Kennedy, both victims of assassinations, and the father of Congressman Patrick J. Kennedy.

Kennedy was born in Boston and raised in Massachusetts, New York, Florida, and England. He was educated at Harvard College, where he was expelled for cheating on an exam but later readmitted, and the University of Virginia School of Law. His 1958 marriage to Virginia Joan Bennett would later end in divorce. He was a manager in his brother John’s successful 1960 campaign for president, then worked as an assistant district attorney for Suffolk County, Massachusetts.