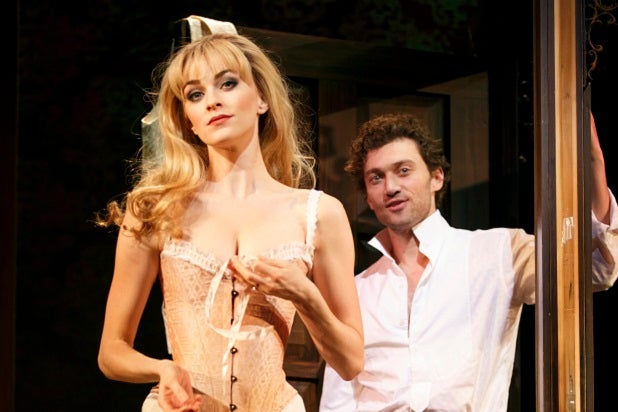 The producers of the wickedly witty new musical “A Gentleman’s Guide to Love & Murder” use the tiniest type possible to credit the source material: “based on a novel by Roy Horniman.”

Cinephiles will know that Horniman’s “Israel Rank: The Autobiography of a Criminal” is also the basis for the 1949 British film “Kind Hearts and Coronets” in which Alec Guinness famously plays the eight murdered victims of a distant relative who feels he deserves to be the Duke of D’Ascoyne.

In “Gentleman’s Guide,” which opened Sunday at the Walter Kerr Theatre, the coveted title has been changed to the Earl of Highhurst, and that is perhaps the least of the improvements made in this brilliant transfer to the musical stage. There’s a reason “Kind Hearts and Coronets” is known as Guinness’s tour de force. Granted, he’s brilliant, but its brilliance in a vacuum. His costar Dennis Price delivers what has to be the dullest serial killer ever to grace the screen.

Bryce Pinkham in “Gentleman’s Guide,” on the other hand, is a stage animal who defines the term “handsome devil.” As Monty Navarro, he has more than a bit of the imp in him – as if he were Marty Feldman’s younger, much better looking brother. Plus he possesses a sumptuous singing voice.

Taking over for Guinness, Jefferson Mays can now claim title to the most oft-murdered man in Broadway history. He does Guinness one better, playing not just eight but nine characters.  He doesn’t erase the memory of Guinness, but you won’t miss Guinness either. The musical is a showcase for Mays’s many faces, but it is Pinkham who must–and does — carry the evening.

Book writer Robert L. Freedman has wisely crammed seven of the eight murders in the show’s first half, so that act two switches focus (even murder can become a bore after a glut of crime) to concentrate on Navarro’s aggressively hetero love life, which sees him courting both his married paramour (Lisa O’Hare) and his fiancee (Lauren Worsham), the sister of victim number three. When the women risks crossing paths in Navarro’s manse, the talented trio delivers “I’ve Decided to Marry You,” a slapstick, door-slamming showstopper that comes wrapped in the very erotic love song “Sibella.” When was the last time you saw a musical that switched back and forth between lust and laughs with a mere two tunes?

At first listen, the score by lyricist-composer Steven Lutvak and co-lyricist Freedman sounds overly chock full of patter songs. It’s not a problem: the wonderfully witty lyrics deserve to be heard and savored. But that’s what they used to say about Stephen Sondheim, whose melodies often needed repeated airings to be appreciated. Lufvak (this is his Broadway debut) borrows from English music hall, Gilbert & Sullivan and Lerner & Loewe (the gay anthem “Better with a Man” is a nice reworking of Henry Higgins’s “A Hymn to Him” and will soon be sung in better piano bars everywhere), but he ultimately makes the songs his own – just as Sondheim started with pastiche in “Follies” and went on to deliver one of Broadway’s greatest scores ever. Sondheim and now Lutvak & Freedman. They can be mentioned in the same sentence.

“Gentleman’s Guide” is a seamlessly directed show, by Darko Tresnjak. The choreographer is Peggy Hickey. There’s not much dance, but it appears as if every gesture, step and pause has been choreographed for optimum comic effect. It’s a compact, immensely inventive show, and especially fun is the low-rent cheesy execution of the murders. Whether a victim is falling to earth from a cathedral top, being stung by a massive swarm or bees, or falling through the ice of a lake, Tresnjak knows that laughs can be drowned in too much space.

Disney Reopens Parks but Financial Impact Might Not Be Worth It
3.