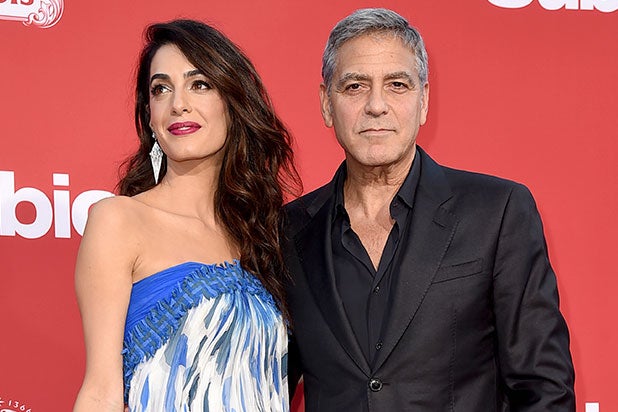 George and Amal Clooney have started a chain reaction, as Hollywood’s most powerful players, including Oprah Winfrey, have followed their lead in advocating gun control in the wake of last week’s mass shooting at a Parkland, Florida high school. A growing list of celebrity donors have promised to give $500,000 to The March for Our Lives, the nationwide gun control demonstration happening March 24 planned by students at the Florida high school that was the site of a shooting that killed 17.

“Amal and I are so inspired by the courage and eloquence of these young men and women from Stoneman Douglas High School,” George Clooney said in a statement on Tuesday. “Our family will be there on March 24 to stand side by side with this incredible generation of young people from all over the country, and in the name of our children Ella and Alexander, we’re donating $500,000 to help pay for this groundbreaking event. Our children’s lives depend on it.”

Teen survivors of the school shooting in Florida last week called for a march on Washington to demand an end to gun violence. On the event’s official website, it reads, “On March 24, the kids and families of March For Our Lives will take to the streets of Washington DC to demand that their lives and safety become a priority and that we end gun violence and mass shootings in our schools today.”

Following the Clooney announcement, Jeffrey and Marilyn Katzenberg said they would also be donating $500,000 to the event: “Marilyn and I are proud to stand with the brave young leaders from Parkland, Florida, who have taken their pain and grief and turned it into action. We will join Amal and George Clooney on March 24 to stand alongside these remarkable young people. We are also donating $500,000 to March for Our Lives to support this historic event.”

Later Tuesday, Steven Spielberg and his wife, Kate Capshaw, matched the Clooney’s donation, followed by Oprah Winfrey. Spielberg and Capshaw praised the student protesters, saying they were “already demonstrating their leadership with a confidence and maturity that belies their ages.”

George and Amal, I couldn’t agree with you more. I am joining forces with you and will match your $500,000 donation to ‘March For Our Lives.’ These inspiring young people remind me of the Freedom Riders of the 60s who also said we’ve had ENOUGH and our voices will be heard.

Last Wednesday, a man opened fire on a high school in Parkland, Fla., leaving 17 people dead. The latest school shooting brought the topic of gun control back into the national conversation, sending both Parkland and the hashtag #GunControlNow trending across the country.

The suspect was later identified as Nikolas Cruz, a former student who had been expelled for disciplinary reasons. At least 14 more were injured.

Survivors from the shooting have been actively speaking out against gun control. Emma Gonzalez made an impassioned speech Saturday calling out President Trump on gun control.

“If the President wants to come up to me, and tell me to my face that it was a terrible tragedy and how it should never have happened and maintain telling us how nothing is going to be done about it, I’m going to happily ask him how much money he received from the National Rifle Association,” said Gonzalez at the gun control rally in Ft. Lauderdale, Florida.