In an open letter made public this week, actor George Clooney called on the British tabloid The Daily Mail to stop publishing photos of celebrities’ young children.

In the letter, Clooney wrote that he was inspired to speak out by a recent Daily Mail story about actress Billie Lourd and her baby. According to Clooney, Daily Mail published a photo of Lourd’s baby and then removed it. TheWrap was unable to identify the specific article — the most recent Daily Mail article about Lourd used photos the actress posted to her Instagram, including one that did not show the child’s face.

Clooney in his letter acknowledged that as a public figure, having his photographs appear in tabloids is “part of the price to pay for doing my job.” But, he said, his two children “have made no such commitment.”

Clooney cited his wife Amal’s work as a human rights lawyer as a particular risk. “The nature of my wife’s work has her confronting and putting on trial terrorist groups,” requiring serious safety precautions in their private life, Clooney wrote. “We cannot protect our children if any publication puts their faces on their cover.”

Noting that he’s never sold a picture of his children and that he and his family do not use social media, he said doing so would place his children’s “lives in jeopardy. Not paranoid jeopardy but real world issues, with real world consequences.”

Read the full text of Clooney’s letter below: 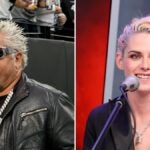 An open letter to the Daily Mail and other publications.

Having just seen photos of Billie Lourd’s 1 year-old baby in your publication, and the fact that you subsequently took those pictures down, we would request that you refrain from putting our children’s faces in your publication. I am a public figure and accept the oftentimes intrusive photos as part of the price to pay for doing my job. Our children have made no such commitment. The nature of my wife’s work has her confronting and putting on trial terrorist groups like ISIS and we take as much precaution as we can to keep our family safe. We cannot protect our children if any publication puts their faces on their cover. We have never sold a picture of our kids, we are not on social media and never post pictures because to do so would put their lives in jeopardy. Not paranoid jeopardy but real world issues, with real world consequences.

We hope that you would agree that the need to sell advertisement isn’t greater than the need to keep innocent children from being targeted.