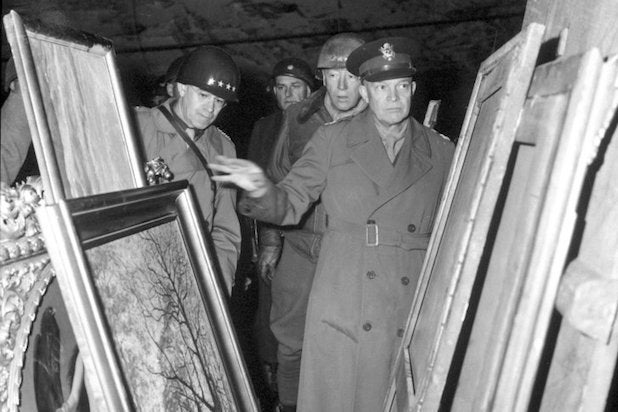 I want to thank George Clooney for making “Monuments Men.”

Using the genre of a Hollywood caper film, Clooney weaves a suspenseful tale of cultural rescue. Almost weekly we are reading about what happened to these stolen art works, especially after a trove of looted works was found recently in Germany, and it’s gratifying to see the backstory on the screen.

Just as Clooney explored the destruction of careers that occurred during the Blacklist period in “Good Night, and Good Luck,” the versatile actor/director has made audiences aware of a lesser known macabre aspect of the Nazi regime — the plan to steal or destroy major artworks.

I pride myself on knowing World War II history, especially about the Holocaust as I researched and produced “Partisans of Vilna,” a documentary on Jewish resistance. I knew the Nazis had raided both museum and personal art collections, especially of Jewish families. But somehow the nuts and bolts story of how FDR gave the green light to a plan to save the art, maneuvering the rescue of major cultural artifacts, was unknown to me.

Using a cast of a band of brothers of art specialists headed by Clooney and rounded out by such well-known actors as Matt Damon, Bill Murray, John Goodman, and Bob Balaban, Clooney uses humor and tension to tell this lesser-known historical story. He also casts a Frenchman, Jean Dujardin, and a Brit, Hugh Bonneville, to show the combined Allied effort in this “liberation” enterprise. Using stars of the award winning “The Artist” and the father figure on the ever popular PBS series “Dowton Abbey” were also clever Clooney casting decisions.

I especially appreciated the humor, a signature Clooney touch, that is projected throughout the film as the art historians and curators of “Monuments Men” banter away about first joining the art rescue efforts and then implementing them. Not equipped to be soldiers at first, they make a quick transition into trained fighters.

As usual, Cate Blanchett gives a fine performance as a crafty Frenchwoman working for the French resistance. She is compelled to work along the Nazis as they raid the French treasures. But she takes advantage of that bastardly task by secretly documenting what pieces are being raided. In one scene her little sabotage act of spitting in the German’s glass offers great satisfaction is a classic act of revenge. Kudos also to Clooney, and his script co writer Grant Heslov, for not following the usual formula of a wartime romance by circumventing a romance between Damon and Blanchett and making it just about the rescue of the art.

The film continues to work as a reliving of the group’s attempts to identify and rescue works before the Nazis destroy or the Soviets steal them. This effective film reminds us that the allied forces not only fought for democracy and to end genocide but also to restore the cultural treasures of Europe. This is an aspect of the war that is still being played out in the courts and on Museum walls.

Audience members interested in knowing more about what really happened should read “The Monuments Men: Allied Heroes, Nazi Thieves, and the Greatest Treasure Hunt in History” by Robert Edsel and Bret Witter or “The Rape of Europa: The Fate of Europe’s Treasures in the Third Reich and the Second World War” by Lynn H. Nicholas. See also the fine documentary, “The Rape of Europa,” directed by Richard Berge, Bonni Cohen, Nicole Newnham.

Because of Clooney’s popularity, new film audiences will view art differently from now on. Next time we go to any major museum in Europe or America today, we will remember that some of the major works may have been stolen during World War II. As the movie tensely presents this story, we’re comforted that at least the “Monuments Men” saved millions of works from destruction or theft.

And as long these works still prevail we are reminded that the Allied forces won and Nazism would not steal the pearls of our civilization.

Aviva Kempner is a writer and documentary filmmaker whose features include 1998's award-winning “The Life and Times of Hank Greenberg,” about the first Jewish baseball star in the major leagues, and 2015's "Rosenwald," about Jewish-American philanthropist Julius Rosenwald. She is recently finished "The Spy Behind Home Plate," a new documentary about OSS spy and pro baseball catcher Moe Berg.