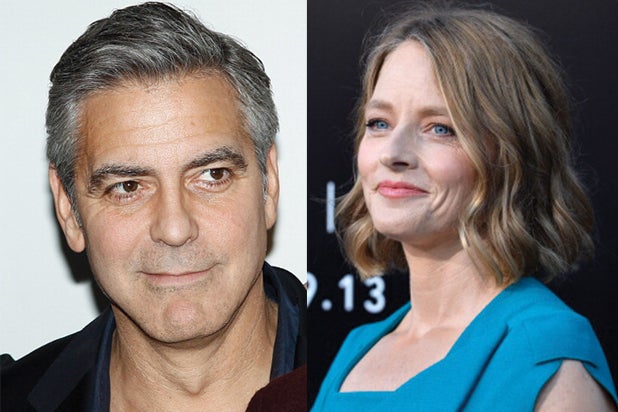 George Clooney may be off-limits now that he’s engaged but he’s still being sought after by women, as director Jodie Foster is courting the Oscar winner to star in her financial drama “Money Monster,” multiple individuals familiar with the project have told TheWrap.

Written by Alan DiFiore (“Grimm”) and Jim Kouf (“National Treasure”) as well as Jamie Linden (“We Are Marshall”), the story follows a TV personality whose insider trading tips have made him the money guru of Wall Street. When a viewer who lost all of his family’s money on a bad tip from the money expert decides to hold him hostage on air, ratings soar as the entire country tunes in to this media frenzy.

Clooney is in early talks to star and should a deal close, the project would find him reteaming with producer Daniel Dubiecki, who received an Oscar nomination for “Up in the Air.”

“This story is so premature, I would be embarrassed as a journalist to even print it,” Clooney’s publicist Stan Rosenfield told TheWrap, insisting that there was no deal in place yet. Representatives for Foster and Dubiecki had no comment.

Lara Alameddine will also produce for Dubiecki’s Allegiance Theater, whose Tim Crane will executive produce with Stuart Ford of IM Global, the company that developed the project and will likely remain involved in some capacity.

“Money Monster” is already being shopped to high-end financiers, none of whom would discuss the potentially potent package on the record with TheWrap. Should Clooney prove unavailable, the project is expected to attract other A-list actors.

From “The Wolf of Wall Street” to “Margin Call,” financial dramas have struck a chord lately with both audiences and critics. Stars have flocked to timely projects that examine the fragile state of America’s economy, from Matt Damon in “Promised Land” to Andrew Garfield in the upcoming indie “99 Homes.”

Clooney, who recently starred in “The Monuments Men” and “Gravity,” just wrapped Brad Bird’s “Tomorrowland,” which Disney will release in May 2015. That was a big studio movie with a long shoot, and an indie film like “Money Monster” would represent a shorter commitment for Clooney, who is extremely busy on the producing side. With his Smokehouse partner Grant Heslov, Clooney has been developing “Our Brand Is Crisis,” “The Yankee Comandante,” “Coronado High” and another “Monster” movie, “The Monster of Florence.” He’s repped by CAA and attorney Michael Adler.

Foster, who boarded the project in October 2012, most recently directed “The Beaver” starring Mel Gibson. Her previous credits include “Home for the Holidays” and “Little Man Tate.” Earlier Thursday, USA announced that Foster would executive produce its pilot “Brand.” She’s repped by UTA for directing.