Sony Pictures has dated the “Untitled George Foreman Biopic” to be released on March 24, 2023, the studio announced on Friday.

The biopic was previously scheduled to be released on Sept. 16, 2022. Sony will now release Tri-Star Pictures’ “The Woman King” in its place. 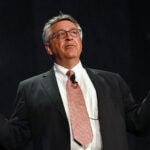 The biopic will be directed by George Tillman Jr. The screenplay is written by Frank Baldwin and George Tillman Jr., and original screenplay by Dan Gordon. Producers are Peter Guber and David Zelon. The film is to star Khris Davis as Foreman and Sullivan Jones as legendary fighter Muhammad Ali. Michael K. Williams, who recently passed away, was previously attached to play Doc Broadus, who was Foreman’s trainer and mentor.

“The Woman King” is a historical epic inspired by true events that took place in The Kingdom of Dahomey, one of the most powerful states of Africa in the 18th and 19th centuries. The story follows Nanisca, General of the all-female military unit, and Nawi, an ambitious recruit, who together fought enemies who violated their honor, enslaved their people, and threatened to destroy everything they’ve lived for.