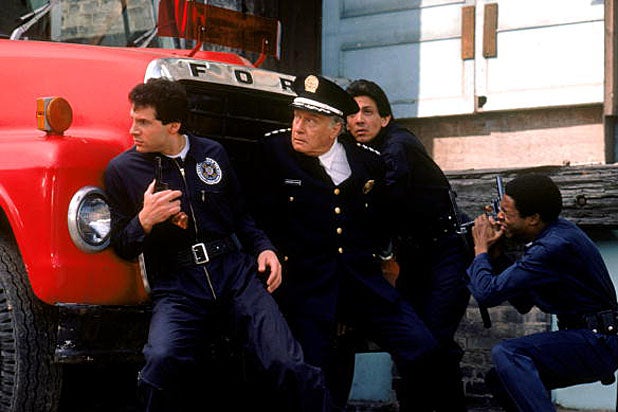 George Gaynes, the beloved character actor best known for his work in the “Police Academy” films and on “Punky Brewster,” died at his daughter’s home in North Bend, Washington. He was 98.

His death Monday was confirmed by his daughter, Iya Gaynes Falcone Brown, according to the New York Times.

Gaynes (above middle) starred as Cmdt. Eric Lassard in all seven of the “Police Academy” comedies, opposite Steve Guttenberg and Bubba Smith, as well as in a TV spin-off in 1998.

He is also well known for his roles as curmudgeonly Henry Warnimont on the NBC series “Punky Brewster,” as high-powered theatrical producer Arthur Feldman on “The Days and Nights of Molly Dodd,” and as a soap opera star who had a crush on Dustin Hoffman (dressed in drag) in 1982’s “Tootsie.”

Gaynes was a soap opera actor in real life too, appearing on “General Hospital” as Frank Smith. He also had TV roles on “Cheers,” “Hawaii Five-O,” “Columbo,” “Chicago Hope,” and “Hogan’s Heroes.”

Not only was Gaynes a multi-talented actor, but he was also a baritone singer. His strong vocal skills often enhanced the roles he played in films, on TV and on the stage, both in musical comedies and operas in New York and Europe.

In his popular role as Warnimont on “Punky Brewster,” Gaynes’ character found an abandoned little girl (Soleil Moon Frye) in an empty apartment and became first her foster parent and then her adoptive father.

Born George Jongejans in Helsinki, Finland, on May 16, 1917, Gaynes was raised in France, England and Switzerland. He studied in Milan and performed in Italy and France, before his career was interrupted by World War II, during which he crossed the Pyrenees and was interned in Spain for three months. After being released, he went to Britain and enlisted in the Royal Dutch Navy.

Gaynes moved to New York after the war and began appearing in operas, before advancing to Broadway as a stage actor.

Gaynes retired in 2003 after appearing in the comedy “Just Married,” starring Ashton Kutcher and Brittany Murphy. He lived in Santa Barbara, California, before moving to Washington to stay with his daughter’s family.

Gaynes is survived by his wife, Allyn Ann McLerie, daughter, one granddaughter and two great-granddaughters. His son, Matthew, died in a car crash in 1989.