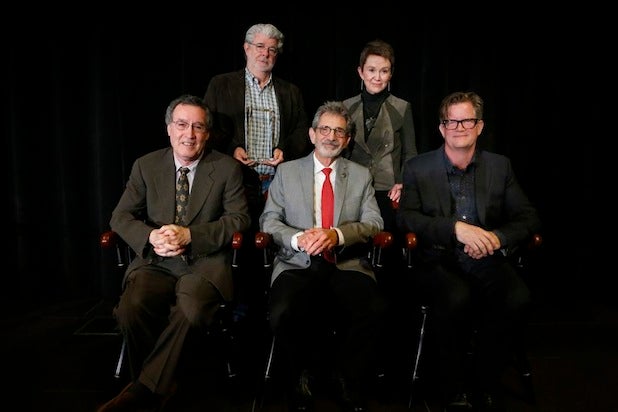 George Lucas returned to the USC campus and the building that bears his name on Thursday to honor three filmmakers and teachers with chair endowments in the School of Cinematic Arts. Bruce Block, Michael Fink and Alex McDowell were the recipients of this honor.

Bruce Block received the Sergei Eisenstein Endowed Chair for Cinematic Design. Block is a producer of movies including “As Good as It Gets,” “Something’s Gotta Give” and “The Holiday,” and directs documentaries, commercials, IMAX movies and NASA simulations. His book, “The Visual Story,” is used by film students across the world – it has been published in six languages.

“The audience can’t see us, and it’s a time for us to learn about the practice and structure of visuals,” Block said he tells his students each semester. “We get to play with it, we get to rehearse. I get to take Eisenstein’s concepts, apply them to modern media and watch my students light up when they discover and use everything that Sergei Eisenstein left us. When my class has ended the curtain goes up and my students go out and make movies that hopefully unite the story and the visual structures together.

Fink, honored with the George Mélies Endowed Chair in Visual Effects, began his work with visual effects with 1977’s “The China Syndrome.” Some of his credits include “Blade Runner,” “Avatar” and “Life of Pi.” He won an Oscar for his visual effects work in 2008 for “The Golden Compass.”

Fink noted that the chair was named after a personal hero. “Mélies never imagined his tricks separate from the story and the world he was building,” Fink said. “Mélies said, ‘it’s absolutely necessary to create the impossible, then to photograph it so it can be seen.'”

McDowell, the third and final recipient of the night, received the William Cameron Menzies Endowed Chair in Production Design. McDowell credits in production design include “Fight Club,” “Minority Report” and “Man of Steel.”

“At the start of the 21st century, we find ourselves in the eye of another revolution in our media,” McDowell said. “The credit that Menzies inspired, this production designed by, has never been more apt or necessary as we literally begin to design the production system anew, often with the designer the master planner.”

Lucas said he endowed these chair to honor these artists and told the crowd, “don’t forget the basics, don’t get enamored with new technology because it’s not new. Just the medium we’re working in is new, but that doesn’t change anything. The art that we do is exactly the same. The goal that we have is exactly the same as Will Cameron Menzies, Mélies and… Eisenstein. It’s beyond technology, it’s the art of movies.”