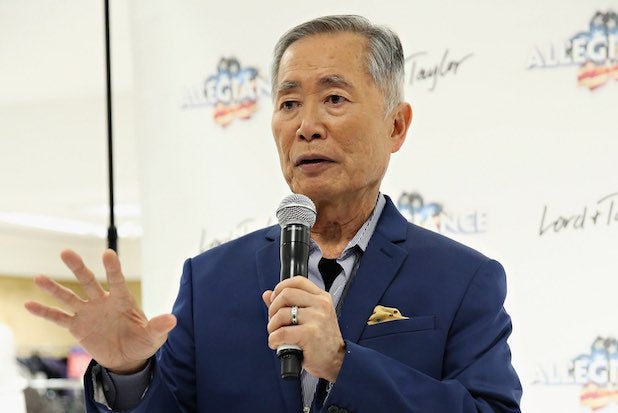 George Takei has condemned any government plans for a Muslim registry, which a Donald Trump surrogate compared to American Japanese internment camps during World War II while speaking to Megyn Kelly on Fox News earlier this week.

The former “Star Trek” actor wrote a Washington Post op-ed headlined “They interned my family. Don’t let them do it to Muslims,” which criticizes former Navy SEAL Carl Higbie’s comment to Kelly that “there is precedent” for such a registry.

“Stop and consider these words. The internment was a dark chapter of American history, in which 120,000 people, including me and my family, lost our homes, our livelihoods, and our freedoms because we happened to look like the people who bombed Pearl Harbor,” Takei wrote. “Higbie speaks of the internment in the abstract, as a ‘precedent’ or a policy, ignoring the true human tragedy that occurred.”

Takei was five years old when his family was “forced at gunpoint” from their Los Angeles home, and relocated to the Rohwer Relocation Center in Arkansas, where Takei said they were “prisoners in our own country.”

“It was normal to stand each day in our makeshift classroom, reciting the words to the Pledge of Allegiance, ‘With liberty and justice for all,’ as I looked past the U.S. flag out the window, the barbed wire of the camp just visible behind it,” Takei wrote. “Not until I was older did I understand the irony of those words and the injustice that had been visited on so many of us. As I studied civics and government in school, I came to see the internment as an assault not only upon an entire group of Americans, but upon the Constitution itself — how its guarantees of due process and equal protection had been decimated by forces of fear and prejudice unleashed by unscrupulous politicians.”

Trump’s transition team spokesman released a statement on Thursday denying that the President-elect is considering a Muslim registry.

“President-election Trump has never advocated for any registry or system that tracks individuals based on their religion, and to imply otherwise is completely false,” Jason Miller, communications director of Trump’s presidential transition team, said. “The national registry of foreign visitors from countries with high terrorism activity that was in place during the Bush and Obama administrations gave intelligence and law enforcement communities additional tools to keep our country safe, but the President-elect plans on releasing his own vetting policies after he is sworn in.”

Trump has previously called for “extreme vetting” of immigrants, in hopes of catching radical Islam terrorists before they enter the country.

Takei points out that the closest Trump has come to commenting on internment camps, specifically, is during a Time interview when asked if he would have supported or opposed the act enforced by President Franklin D. Roosevelt, a Democrat. “I would have had to be there at the time to tell you, to give you a proper answer,” Trump said.

Instead, Takei took a bigger issue with Trump supporter Higbie’s additional comment comparing a Muslim registry to internment camps. “There is historical, factual precedent to do things [that] are not politically popular and sometimes not right, in the interest of national security,” Higbie told the New York Times after his Fox News appearance.

“Let us all be clear: ‘National security’ must never again be permitted to justify wholesale denial of constitutional rights and protections,” Takei wrote. “If it is freedom and our way of life that we fight for, our first obligation is to ensure that our own government adheres to those principles. Without that, we are no better than our enemies. Let us also agree that ethnic or religious discrimination cannot be justified by calls for greater security.”

He concluded: “The Constitution and the government exist in large measure to protect against the excesses of democracies. This is particularly salient when, in an atmosphere of fear or mistrust, one group is singled out and vilified, as Japanese Americans were during World War II and as Muslim Americans are today. How terrible it is to contemplate, once again, that the government itself might once more be the very instrument of terror and division. That cannot happen again. We cannot allow it.”