George Takei, Elliott Gould and Peter Samuelson were among the Hollywood heavyweights at the Hero: Chiune Sugihara event Friday night, honoring the legacy of the Japanese diplomat who saved thousands of Polish Jews during World War II. The cross-cultural event was held at the Saban Theater in Beverly Hills.

Sugihara was the vice consul general stationed in Kaunas, Lithuania, at the onset of the war. In 1940, he saved thousands of Polish Jewish refugees by issuing transit visas allowing them to escape Nazi persecution to the Far East.

The evening kicked off with a Shabbat service led by Rabbi David Baron, who welcomed members of the Japanese community, including Los Angeles’ consul general of Japan, Akira Muto.

Also Read: George Takei Says Trump's Comments About Muslims and Immigrants Are 'an Echo From My Childhood'

Takei recounted the story of the thousands of Polish refugees who had made their way to Lithuania, waiting outside the wrought-iron gates of the consulate, hungry and “trembling from exhaustion and terror.” He spoke of how Sugihara pleaded three times with his superiors to permit him to write the visas, and three times he was denied. At great risk to himself and his family, Sugihara defied his orders and issued them anyway.

“So many people came day after day. He recruited his wife to help him. He wrote his name and his wife stamped the visas. They worked 18-20 hours a day. Day after day after day. And the people continued to come — all with desperation in their eyes,” Takei said. Sugihara wrote visas for 50 days until the order came for the consulate to be closed. Even as he was forced to leave, Sugihara continued to sign, tossing visas out of the window of his departing train. 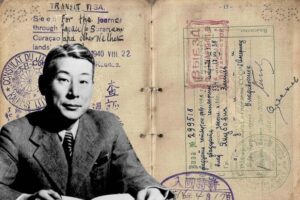 “One man saved all those lives,” Takei said. “And today, the descendants of those who were saved by Sugihara number in the tens of thousands. They are doctors and lawyers. They are artists and musicians. One man can make a difference. And that is why we are gathered here tonight, inspired by his courage and his humanity. We of many different races, faiths and cultures. All here in oneness.”

Actress Anne-Marie Johnson energized the crowd with a call to action. “There are other ways to be brave, regardless of who or how we worship, regardless of our station in life, regardless of who we love or how we identify ourselves — we must work together to save the soul of this country,” she said, calling upon the audience to fight “lack of empathy, racism, tribalism, and nationalism.”

And while the tone on stage mostly stayed inspirational, attendees backstage shared their concerns about the divisive and punitive actions coming from the White House, including the banning of Muslims, the mass incarceration of immigrants, and comments made this week by President Trump questioning the loyalty of Jews who vote Democratic.

“These are the darkest times ever in my life; I’m 68 years old,” said former SAG President Alan Rosenberg, who performed at the event. “It’s worse than the Civil War. At least in the Civil War we had a president who wanted to keep the country together. Here we have one that prides on tearing us apart.”

“It’s never been really worse,” Gould echoed. “America is based on diversity. We’re all the same. We want to be free.”

Takei spoke openly about the dangers of divisiveness, which he experienced firsthand as a child when he and thousands of other Japanese Americans were put into internment camps across the country during World War II.

“When I was a child, I was incarcerated by the United States and put in American concentration camps,” Takei said. “What put us in these camps were these sweeping statements, generalizations made by politicians that we were all potential spies, saboteurs. We see the same kind of behavior by politicians today: that Muslims are terrorists, that Latinos coming across the southern border are rapists and murderers.”

His experience in the camp inspired scenes in his current AMC series, “The Terror,” and recently released graphic memoir “They Call Us Enemy.”

But all spoke positively about the unifying, cross-cultural event being inspired by Sugihara’s kindness and humanity. 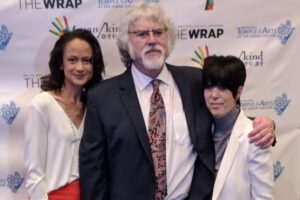 That unity was perhaps best exemplified in the musical performances, from a rendition of “Land of the Rising Sun” written by British rocker Keith Emerson for the people of Japan, arranged and performed by Kae Matsumoto, to a version of “Lu Yehi” (the Hebrew “answer” to the Beatles “Let It Be”) performed by Adi Argelazi and the Los Angeles Trans Chorus. They also performed “Note to God” by Diane Warren, who was in attendance and gave the rendition a standing ovation. Rex Dean and the Trans Chorus closed the show with “I’ll Be There.”

The event was produced by Richard Stellar and The Man/Kind Project, who hope to share Sugihara’s story on their website and in classrooms.

“We show what connects us together is more powerful than what drives us apart,” Stellar explained of the nonprofit’s mission. “It’s by making the words and actions of good people like Sugihara relevant to this generation and future generations.”