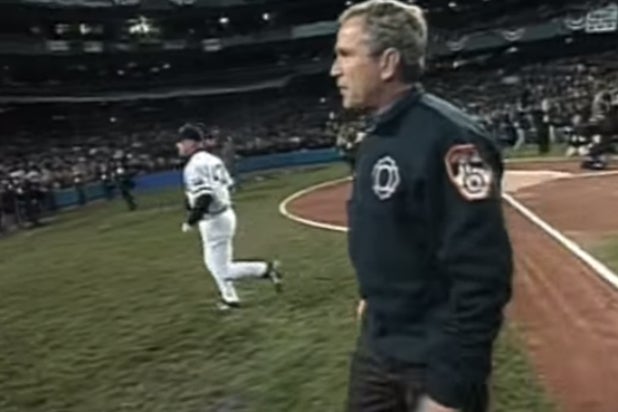 Bush’s fastball from the Yankee Stadium pitcher’s mound was a perfect strike, which is exactly what the nation needed from the moment. Fourteen years later, that may sound like a melodramatic overstatement, but at the time it was the perfect throw at the perfect venue in the suffering city that needed a lift.

“First Pitch” recounts stories from the Yankees’ visit to the New York City Armory, where they comforted citizens looking for lost family members, to what it took for the president’s Secret Service team to safely allow him to throw out the pitch.

“As a fan of the great ’30 for 30’ series, I’m so pleased that ESPN Films and Jim Gray found Angus Wall to direct this,” said George W. Bush. “They did a brilliant job telling this story about how baseball helped our nation start to heal after 9/11.”

Connor Schell, senior vice president, ESPN Films and Original Content added: “From its inception, ’30 for 30’ has always looked to tell stories about moments where sports intersects with culture and the culture changes. Perhaps no moment epitomizes that more than the ceremonial first pitch thrown out by the President that day at Yankee Stadium, reflecting the strength of a city and a nation.”

The story behind that pitch, as told by the President himself and the others so closely involved, offers a glimpse into the variety of emotions that the country was feeling at the time,” Schell concluded. “We are honored to tell this story as part of the ’30 for 30’ series.”

“First Pitch,” part of ESPN Films’ “30 for 30 Shorts” documentary series, will premiere on Friday, Sept. 11, on “SportsCenter” immediately after the national moment of silence, as well as on Grantland.com and ESPN.com. It will also air that evening during the 6 p.m. “SportsCenter” on ESPN2.

For now, relive the first pitch below. If it gets a little dusty watching the clip, that’s not from the infield dirt.