Compared to other former presidents, George W. Bush has kept a relatively low profile since leaving office in 2009 — working on his book, his Presidential Center at Southern Methodist and going on a joint humanitarian mission to earthquake-ravaged Haiti (where while touring the region he managed to create a viral stir wiping his hand on Bill Clinton’s shirt).

But on Tuesday W made the giant leap into social media, joining Facebook and (it appears) Twitter, where he is following Twitter feeds Republican Party, John McCain, Sarah Palin and Barack Obama.

The move is no doubt driven in part by a forthcoming marketing push for the book ( “Decision Points”) Bush has been working on. (The Twitter account — labeled "George Bush Fans" — is not yet verified, and a few of his tweets are in third person; in one, he pimps his wife Laura’s bestselling memoir.)

It’s also, in part, to let his Facebook “fans” and Twitter followers know what he’s been up to the last 18 months:

Since leaving office, President Bush has remained active. He has visited 20 states and 8 countries; given over 65 speeches; launched the George W. Bush Presidential Center; participated in 4 policy conferences through The Bush Institute; finished the first draft of his memoir, “Decision Points”; and partnered with President Clinton to establish the Clinton Bush Haiti Fund. More on his activities in future posts…

As he "wrote" in his first tweet, "stay tuned." 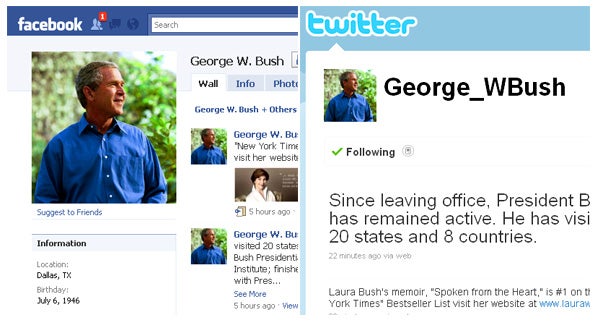 UPDATE: The Twitter account is being maintained by the George W. Bush Presidential Center, according to Jake Tapper. So if you were hoping for personal tweets, well, shame on you!