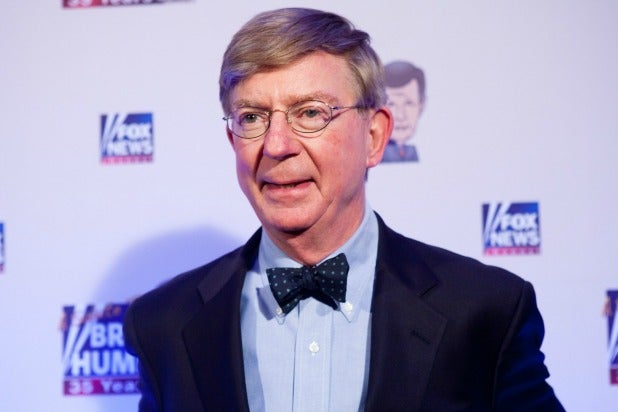 Conservative columnist and Republican pundit George Will announced that he is leaving the political party he’s been affiliated with for 40 years over Donald Trump.

Will made the announcement during an interview with PJ Media on Friday. Prior to the announcement, Will told an audience at the Federalist Society, “This is not my party.”

During the speech, he also recommended conceding this year’s election to the Democrats. “Make sure he loses,” Will said of Trump. “Grit their teeth for four years and win the White House [in 2020].”

Will’s comments echoed an opinion piece that he wrote in the Washington Post earlier this week.

“Trump’s campaign has less cash than some congressional candidates have, so Republican donors have never been more important than they are at this moment,” he wrote on Wednesday. “They can save their party by not aiding its nominee.”

Like many Democrats, Will called out the fact that the presumptive Republican nominee has not released his tax returns. “Only he knows what he is hiding by being the first presidential nominee in two generations not to release his tax returns,” Will wrote.

Also Read: Marie Claire Mexico to Ivanka Trump: 'Protect Us From Your Father'

“It is reasonable to assume that the returns would refute many of his assertions about his net worth, his charitableness and his supposed business wizardry. They might also reveal some awkwardly small tax payments.”

Trump, who has criticized Will throughout his campaign, sent one parting jab to the Fox News contributor on Sunday.

George Will, one of the most overrated political pundits (who lost his way long ago), has left the Republican Party.He's made many bad calls

With his departure, Will announced he will change his party affiliation from Republican to “unaffiliated” later this month.