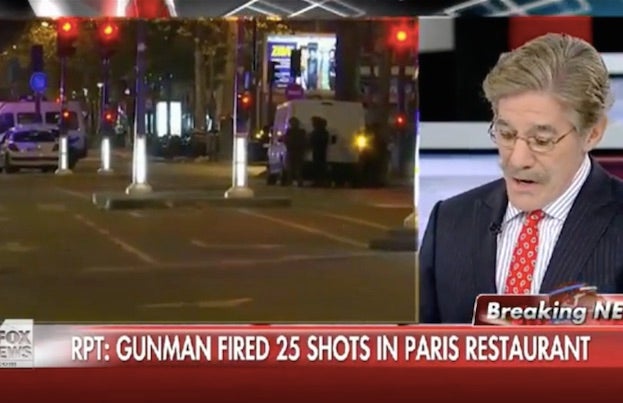 A tearful Geraldo Rivera broke down on Friday over his daughter Simone, who was one of the thousands watching a soccer match at Stade de France outside Paris when several bombs detonated as part of coordinated attacks across the French capital.

“I just thank God she wasn’t at the rock concert but was at the soccer stadium,” an emotional Rivera told Shepard Smith on Fox News, referring to the Eagles of Death Metal performance at Bataclan concert hall where the worst carnage took place.

The veteran news anchor lost his composure when he showed a picture of him and his daughter together.

“Here’s my gorgeous daughter,” he cried. “It’s a lot easier to report these things than to experience them myself,” he continued, describing his 21-year-old daughter as a wonderful person with a “gentle soul.”

Rivera also spoke to Simone on Fox News, who recounted the horrific sequence of events at the soccer stadium.

“I’m shaking still,” she said, describing the chaos at when bombs went off and being stranded afterward as all transportation shut down.

“Do you want to come home, honey?” an emotional Rivera asked his daughter.

And early Saturday morning, Rivera took to Twitter to call on President Obama to go to war against ISIS.

We are a nation at war. @POTUS must see this & lead an all out effort to #KillISIS. They surely want to kill us and everything we hold dear.